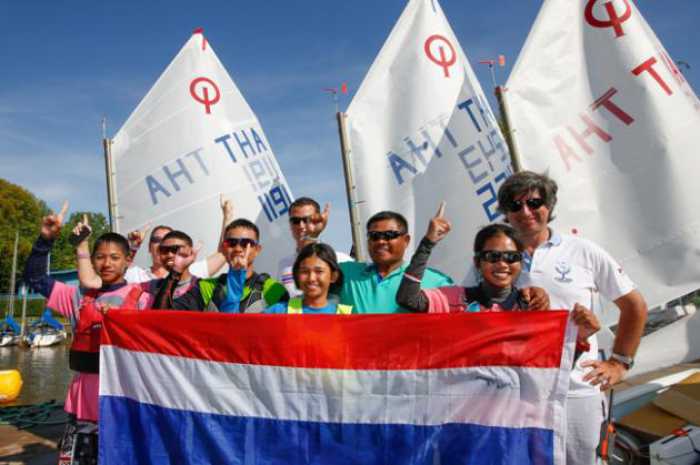 PHUKET: The Thai team claimed gold in the team racing event at the Optimist World Championship 2014 Argentina on Sunday, returning to shore to cheers from around the world.

After a two-year absence from the prestigious international event, the five member team defeated Asian Games gold medalist Singapore in the team racing finals which saw 38 nations competing for the title in round robin bouts on the De La Plata off the coast of the Club Nautico San Isidro of Buenos Aires.

After a much deserved rest on Monday, the sailors will resume individual fleet racing with Voravong Rachrattanaruk and Suthon Yampinid, currently placed 13th and 14th after three days, still within reach of a top 10 result, and Nopporn Booncherd in 30th out of 270 sailors from 50 countries.

All sailors at the international event are under 16, the youngest on the Thai team, Intira Panpiboon of Pattaya’s Royal Varuna Yacht Club, only 12.

All other Thai sailors are with the Sattahip-based Junior Sailing Squadron of Thailand and Yacht Racing Association of Thailand, including Suthida Poonpat, cousin of former Optimist World Champion Noppakao Poonpat, who led the Thai team to a sweep of all four titles on offer at the event in 2010.