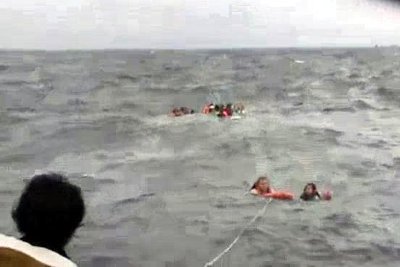 PHUKET: Following the capsize of the speedboat Luk Pradu 26 off Phi Phi Island on Monday, Marine Office chief Phuripat Theerakulpisut has confirmed to the Gazette that the Luk Pradu 26 was legal and both structurally and mechanically sound.

“The speedboat [was a composite] with some parts fabricated from wood. There were no problems with the vessel. It was insured, licensed and inspected annually. Furthermore the boat was crewed on that day by an engineer and driver who are both experienced boat handlers.”

“The speedboat capsized due to the heavy storm,” he said, adding “In accordance with our safety regulations, the boat was carrying life jackets for all passengers.”

Mr Phuripat assesses that the capsizing was an accident and as such, the boat operator was not to face charges.

Phuket Marine Police confirmed that all passengers and crew were alive; the final 24 survivors being landed at Chalong Pier that same afternoon.

Pongsak Pachantabut, the manager of Phuket New Generation Travel Company, confirmed to the Gazette that there were 37 tourists of varying nationalities and four crew members on board the Luk Pradu 26.

He also vowed to cover all medical expenses for those injured in the incident and to offer compensation for the emotional stress suffered.

“Another speedboat was able to immediately rescue 13 tourists, including a child, and take them back to Koh Phi Phi,” Mr Pongsak said.

However, that left 24 tourists and the crew members bobbing in the rough sea for more than an hour.

Porrared Eakjit, a tour guide from the vessel V-Marine 1 assisted in the rescue of passengers in the water.

“Two of our boats were leaving Maya Bay with tourists heading back to Phuket after a trip to Krabi. We were about five nautical miles from Phi Phi when we came across the survivors in the water.”

V-Marine 1 recovered the remaining 24 tourists and crew who had been in the water for an hour.

“Some were injured and all looked exhausted,” Mr Porrared said.

At Chalong Pier seven tourists from China, England and Indonesia were transferred by ambulance to Phuket International Hospital for treatment to a variety of minor injuries.

Given that storm weather caused the sinking, the Gazette asked Chief Phuripat for his views on how boat operators act on weather warnings issued by the Thailand Meteorological Department (TMD).

“The TMD is responsible for issuing weather warnings. However in some cases, tour operators have other factors to consider in their decision making process; such as, when their clients have already booked the trip.”

Phuket New Generation Travel manager Pongsak Pachntabut said that they are still looking for the wreck of the Luk Pradu 26, which sank about half an hour after the accident.

The salvage team do not know exactly where speedboat is lying, but they are still searching.

Phuket Sports: Golf round up and Ryder Cup team updates