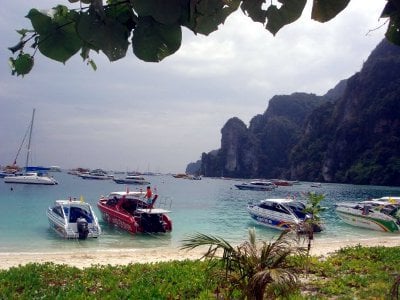 PHUKET: Krabi Police are still working to identify vessels that were at Tonsai Beach on Phi Phi Island when a French tourist was killed while snorkeling in the area on August 18.

From this, Krabi Police presume that Mr Jannequin was run over by a boat, the propeller blades inflicting the fatal injury.

Lt Col Bundit Khaosutham of the Krabi Tourist Police told the Phuket Gazette that he had informed the French Embassy of the incident.

Following the death of Mr Jannequin, who was a government officer at the French Ministry of Agriculture, his snorkeling partner Pierre Yves Martin submitted a written statement, in French, to Krabi Tourist Police.

Mr Martin, 37, who had been a close friend of Mr Jannequin for eight years, wrote in his statement that on August 18, at about 11.30am, he and Mr Jannequin went snorkeling off Tonsai Beach near the Mama Beach Hotel.

After snorkeling in the swimming zone, cordoned off by a line of floating pontoons, the pair decided to leave the safety zone to snorkel around some coral located outside. Mr Martin told police that there were three or four dive boats in the area at the time.

They had been snorkeling around the coral reef for about 30 minutes and were returning to shore at the time of the tragedy. Mr Martin was leading, with Mr Jannequin following some three meters behind.

In his statement Mr Martin wrote, “While I was on the surface breathing, preparing to dive again, I heard a scream from behind me. I turned but was immediately struck and disorientated by waves.”

Mr Martin said the waves were consistent to those created by a fast-moving speedboat.

After regaining his bearings, he saw his friend floating in the water and swam towards him. On reaching him, he saw the seriousness of the injury to his friend’s head and realized that he was dead.

“I found him with cuts on his body and a severely deep wound to his head… his blood was everywhere around us.

“I supported him with one arm and shouted towards a dive boat some 300 meters from us at the bay’s north end. No one heard us, so supporting Oliver I started to swim ashore.”

“I do not think anyone else saw the accident because there was no one else swimming in the area. It happened a long way away from the dive boats.”

“About 10 minutes after the accident, a black “long-tail” boat passed us and I asked for help. The boatman told us to wait and said he would get a dive boat to come and help us. After 10 minutes, I gave up waiting and decided to carry on swimming to get Olivier ashore.”

“I saw a small hut on the rocky coastline but there was no one around, so I continued swimming, supporting him all the way, back to Mama Beach. It was there that people helped me take Olivier to the Phi Phi Island Hospital.”

Mr Martin thought the scream he had heard might not have been from Mr Jannequin, as his friend had a snorkel tube in his mouth. He thought it more likely to have come from someone aboard the boat that he believes struck Mr Jannequin.

Although Mr Martin said he did not see a boat strike Mr Jannequin, he feels confident that it was a speedboat because it happened so fast. He discounted the possibility that it could have been a longtail boat, as these make a loud noise and can be heard from far off, even underwater, he said.

“I presumed Olivier’s wounds were from a sharp object, such as the propeller of a passing boat. I did not see what kind of boat it was because I was searching for Olivier. Although there were none in the area, I thought it was probably a speedboat moving at high speed. Also I’m sure that the boat would have been heading to the beach.”

Lt Wissawa Sanaeha of the Phi Phi Island Police said that Mr Martin and Mr Jannequin arrived on Koh Phi Phi on August 14 and were staying at the Sandview Hotel. They were scheduled to fly home on August 23.

Mr Martin told Krabi Police that their hotel receptionist told them that the area around the swimming zone, where they were snorkeling, was free from fast-moving speedboats. Most vessels there are long-tail boats and boats passing through the area would be travelling at low speeds, they were told.

“We went snorkeling nearly every day. In the time we spent on the beach we saw many speedboats taking tourists to the beach… My two brothers and I would like Olivier’s death to serve as an example for the need to implement more safety measures,” Mr Martin said.

Police asked Mr Martin to appear before the Krabi Prosecutor’s Office as a witness, but he was forced to decline as he was scheduled to leave Phuket on August 23.

Col Bundit Khaosutham of the Krabi Tourist Police told Gazette yesterday, “We still don’t know which speedboat hit the Mr Jannequin, whose body was repatriated two days after the accident.

“His relatives sent a message to us through the French embassy asking us to try to find the speedboat driver. We keep trying to find the guilty party, but it’s not easy due to the lack of witnesses. We do realize the importance of this case,” he said.

However, Col Bundit explained that safety measures were already in place, including a swimming zone, snorkeling zone and boat parking area clearly sectioned off by floating markers to notify tourists.

He added that efforts to warn tourists to not stray from the designated zones were continual.

“In this case the two of them went off at midday, when many boats are running to and fro for lunch on the island.

“Actually, a pontoon showing that the area [where the accident occurred] was offshore from a designated boat parking zone was in place at the time,” he added.

Andrew Strauss: “It just hasn’t been a consideration”