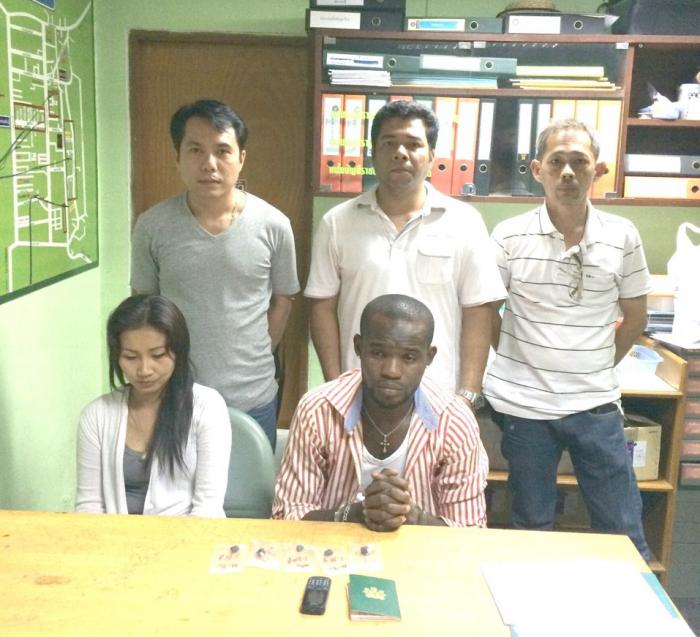 PHUKET: A series of small drug busts led to a sting operation last night that concluded with the arrest of a Nigerian man for dealing cocaine.

“Last night, we were informed that Somkid ‘Waew’ Kwanngern, 30, was in possession of cocaine so we went to her apartment behind Patong Municipality Fire Department,” said Lt Col Sutthichai Thianpho of the Patong Police.

“She arrived at the apartment at about 7pm. We asked to search her and found 1.2 grams of cocaine,” said Col Suttichai.

Ms Waew told police that she had bought the cocaine from a foreign male through one of her friends.

Ms Waew led police to her friend, named in the arrest report as British national Curtis Martin Taylor, 32, at his apartment on 50 Pi Road.

“We searched him and found one gram of marijuana in his pocket,” said Col Sutthichai.

“Ms Somkid called Mr Onyinyechukwu asking for 2,500 baht worth of cocaine. They arranged to meet and make the exchange at Mr Martin’s place at KK Apartment,” said Col Suttichai.

Mr Onyinyechukwu soon arrived at the apartment with 5.45 grams of cocaine.

“The two exchanged the drugs and the money, which were fake banknotes provided by police. Ms Somkid signalled the hidden officers after the money was handed over,” explained Col Sutthichai.

Police apprehended Mr Onyinyechukwu and charged him with possession of a Category 2 drug with intent to sell, said Col Sutthichai.