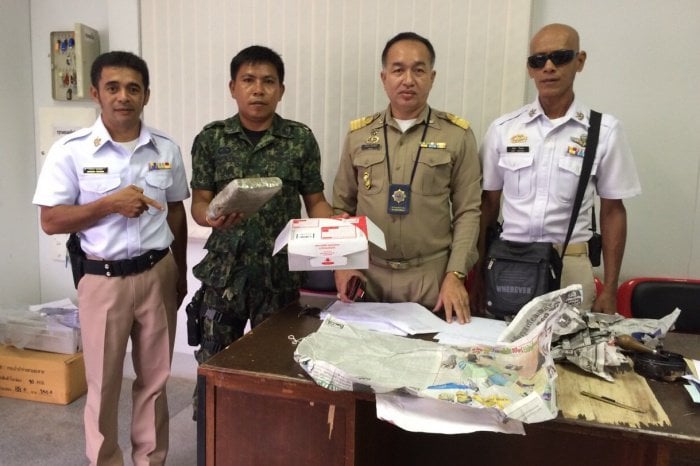 PHUKET: Enormous quantities of drugs are being shipped to Phuket through the Thai Postal system as island dealers buy in bulk through online social media platforms.

“It has become more difficult catching drug dealers after they started using social media applications such as LINE and Facebook to buy and sell their products,” Director of the Narcotics Control Board (NCB) Sithisak Kallyanapradit told Phuket Gazette on Tuesday.

“These platforms are very broad, anyone can use fake identities and evade identification.”

NCB officers are now hot on the trail of those running the operation out of Bangkok, confirmed Mr Sithisak.

“After receiving the initial report from Phuket officers, we have been able to identify a number of the people posting the packages in Bangkok via CCTV footage of them at the post office,” Mr Sithisak said.

“We are in the process of strengthening our case by collecting more evidence and identifying more people in the network. We expect to make sweeping arrests soon.”

The nationally-operated network, which supplies marijuana, ya ice (crystal methamphetamine) and a variety of other drugs, was first identified in Phuket’s Thalang District.

“According to the evidence, it is a very big system that distributes to many places outside Phuket,” Thalang District Chief Veera Kerdsirimongkol said. “Based on the way the drugs are packed, it seems like they have a machine doing it – it’s clearly a big [and well organized] business.”

The NCB and Thalang District officers started unraveling the operation after they put Phuket drug dealer Pichet Thipbamrong, 24, under surveillance.

After about a month of surveillance, Mr Veera and Chief Administrative Officer (Palad) Siripong Leeprasit moved in with a team to arrest Mr Pichet at his rental home in Cherng Talay on June 30.

“In his possession we found 1kg of marijuana, 400 grams of kratom leaves and 1.02g of ya ice [crystal methamphetamine]. Additionally, we found a digital scale and the phone he used to place orders,” Mr Veera said.

Mr Pichet was initially charged with the possession of Categories 1 and 5 drugs.

“He confessed to the charges, and agreed to assist in our investigation,” Mr Veera said.

On Mr Pichet’s phone police found records of his drug orders on the application LINE. On June 29, Mr Pichet had ordered 3kg of marijuana.

Mr Pichet had only 1kg of the 3kg order at the time of the arrest. The remaining 2kg arrived at the Thalang Post Office on July 1.

The message that revealed the shipment was coming in also tipped police off that a shipment would be made from Bangkok to Nakhon Sri Thammarat.

On July 2, Nakhon Sri Thammarat officers moved in and arrested technical college student Nattapon Nuanprajak at the Srichon Post Office as he picked up a 1kg package of marijuana.

Following the successful raids, police asked Mr Pichet to use his phone to place additional orders with the suppliers identified by Mr Pichet only by their nicknames: ‘Tai’ with the LINE name ‘RabbitGirl’ and ‘Dam’.

“We wanted to track down ‘Tai’ and ‘Dam’, so Mr Pichet placed an order for 100g of ya ice and 2kg of marijuana,” Mr Veera explained. “Mr Pichet told us that he had been working with these suppliers for more than a year.”

To combat the ‘Post Office Drug Service’ Mr Veera has suggested that new security measures be taken and new regulations be put in place.

“Post offices should have scanning machines, as well as a drug dog to help put an end to this,” Mr Veera said.

Mr Veera also pointed out that there are a number of private postal companies, whose services could also be abused.

The NCB confirmed to the Gazette that it will be sending letters to all government and non-government postal delivery providers in Thailand asking them to review their policies to help prevent drugs from being shipped throughout the country.

As social media platforms have created an easy method for drug dealers to take orders and coordinate shipments anonymously, Mr Sithsak explained to the Gazette that officers were being trained and prepared specifically on monitoring social media activity in order to help crack down on crime.

“Once all SIM cards are required to be registered by the end of this month, it will help us to track down [a lot of] these criminals,” Mr Sithsak said. “I understand that we should be able to follow the IP address used when they are accessing fake Facebook or LINE accounts to track down the phone and the suspect. However, the technical systems we have access to in Thailand are limited, so we will just have to see how effectively we can manage the situation.”

This article and another relating to it are in the current (July 11-17 issue) issue of the hard-copy Phuket Gazette newspaper, out on the streets of Phuket and across the nation this morning.