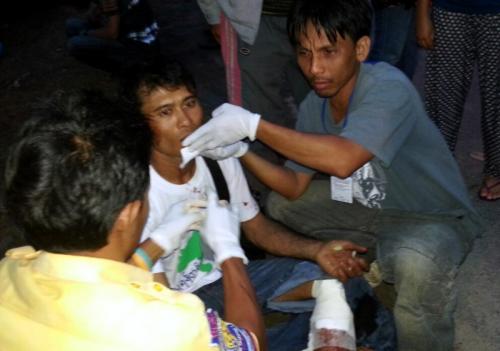 The po thong, a six-wheeled “bus” with two planks for passenger seats, was driven by Abdollah Sairaya, 54.

“I was contacted by the workers at about 5pm. They asked me to pick them up from a construction site in Tah Chat Chai and take them to pay their respects at the Big Buddha (map here) as it was Makha Bucha Day,” he said.

“One of my front tryes exploded. The vehicle swerved and hit a power pole,” he added.

“All the injured people were sent to Thalang Hospital for immediate treatment,” he said.

According to a nurse at the hospital, 26 Burmese arrived for treatment: 19 women, six men and a 6-year-old boy.

“Two people were admitted for neck and back pains, and four others were sent to Vachira Phuket Hospital for hip and leg injuries. None of the injuries was serious,” she said.

This was the third dangerous tyre incident on Thepkrasattri Road in the past month.

On January 31, a runaway tyre from a tour bus narrowly missed a traffic policeman (story here).

On February 6, one of two tyres that came off a truck struck Russian tourist Alexey Balabko, 26, while he was riding along Thepkrasattri Road. He died six days later (story here).