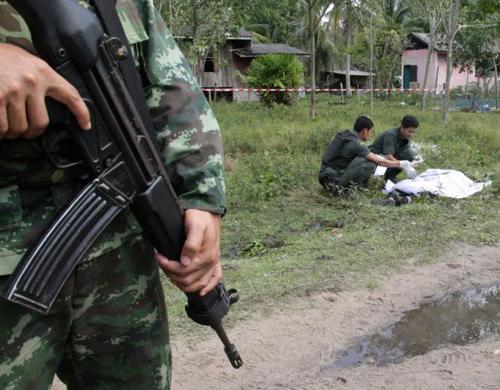 PHUKET: A former insurgent has urged the government to extend the plea-bargaining scheme to cover the entire southern border areas in order to attract more militants to surrender.

Rawyalee Bueraheng, who has been released after joining the scheme, suggested the government extend the program beyond the existing area of Songkhla’s Na Thawee, Thepha, Chana, and Saba Yoi districts and Pattani’s Mae Lan district.

The former insurgent was released by the Provincial Songkhla’s Nathawee District Court on October 29, with all criminal charges against him dropped and the assurance that cases against him would not be reopened.

He revealed that his life has become like a sunny day after a dark storm since he completed the six-month re-education as part of a plea-bargaining scheme under Article 21 of the Internal Security Law.

Rawyalee said he had been given a second chance to live a normal life in his native town in Pattani’s Nong Chik district after escaping a charge of conspiring to kill two security volunteers in Songkhla’s Thepha district on August 24 last year.

He said that after difficulties while on the run and worrying about his family, he decided to lay down his arms and return to the legal fold when he learned about the plea-bargaining scheme.

He said in the beginning he was not certain about the re-education. “I was massively stressed because I was not sure outside people would forgive me, but I did have hope they would,’ he said.

During the re-education, he underwent computer occupational training, including Islamic study. “Religious gurus and leaders came to talk to me and taught me about the correct Islamic principles,’ he said.

After being released, he worked as a construction worker to save money to open an Internet cafe in his village where he lives with his pregnant wife and two-year-old daughter.

“After getting out, I have never associated with or wanted to know about the insurgency again. I just want to own an Internet cafe that would give people in the village the chance to be linked to information and the world. Most importantly, I am happy to be able to be with my family,’ he said.

He believes that if the plea-bargaining scheme was extended to all southern border areas, not just the four districts of Songkhla and Pattani’s Mae Lan District, more insurgents from Narathiwat and Yala and other areas would join the scheme.