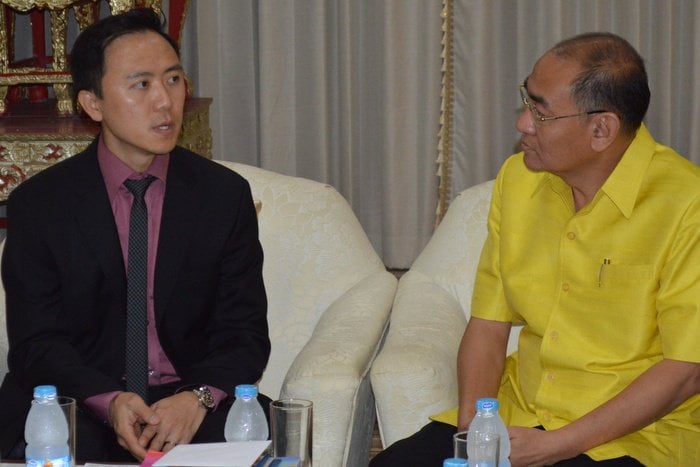 PHUKET: Phuket is one of several popular tourist destinations in Thailand being considered as the location for a consulate for the Embassy of the Republic of Singapore.

Gabriel Liow, a counsellor from the Singapore Embassy, visited Phuket on Wednesday to wish the island’s officials a happy eew year and discuss issues that concern Singaporean tourists and expats in Phuket.

“Mr Liow said that there were not many complaints about Phuket, but some Singaporeans had issues with having lost their passport, and struggled with the inconvenience of the embassy in Bangkok being so far away,” Vice Governor Punlop said.

“So, I asked Mr Liow if his embassy would consider establishing a Singaporean consulate in Phuket.”

Phuket is one of four places in Thailand – along with Chiang Mai, Pattaya and Haad Yai – that is being considered for the new consular office, V/Gov Punlop learned.

Phuket hosts about 100,000 Singaporean tourists a year and is home to about 90 working Singaporean expats.

“Plans for a consulate have not been made yet. However, the Governor’s Office will keep in touch with the Singapore Embassy about the matter,” V/Gov Punlop said.

“I told Mr Liow that next time we hold a meeting with the island’s consulates, we will invite him to join us.”

The date for the next consular meeting has yet to be set, he added.

New Zealander shot in scuffle with Thai stepfather in Phuket