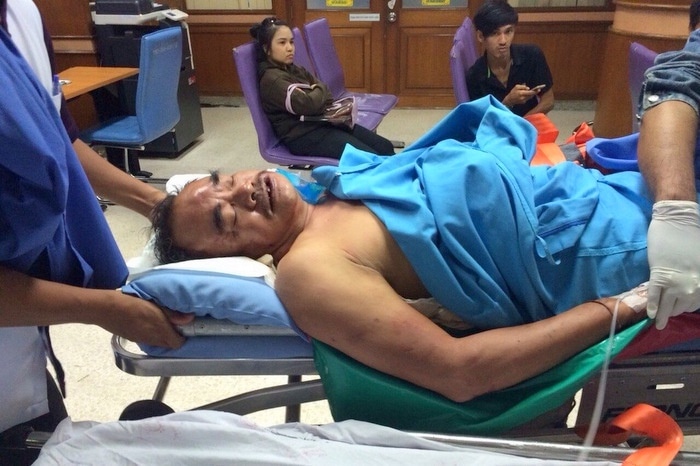 PHUKET: A New Zealander, born to a Thai mother, was shot late last night in an attempt to wrestle a handgun from his stepfather, who was allegedly drunk at the time.

Jamie Smith, 30, was rushed to the new Dibuk Hospital on Chao Fa West Road (story here) after his mother called the police at about 11pm.

When police arrived at the house, they found Mr Smith’s 54-year-old stepfather, Amnat Lakupa-pakavin, on the floor groaning in agony with a gunshot wound to his gut. Mr Amnat had been left behind after Mr Smith’s 25-year-old full-brother, Ronnie, took Mr Smith to the hospital.

“Mr Amnat was drinking with three friends when Mr Smith and Ronnie came to see their mother,” said Lt Col Jamroon Plaiduang of the Chalong Police.

“An argument broke out when Mr Amnat refused to let Mr Smith park his car in the garage. Mr Amnat then reportedly pulled out a gun and attempted to shoot Ronnie.

“Mr Smith tried to disarm his stepfather, but the gun accidentally went off during the struggle, shooting Mr Smith in the arm. A second shot hit Mr Amnat.”

The .38 revolver used in the shooting was found at the scene, Col Jamroon said.

“Mr Amnat is recovering at Vachira Phuket Hospital in Phuket Town, and so is Mr Smith, who was transferred there from Dibuk Hospital,” Col Jamroon said.

“Both have non-critical injuries.”

Police have yet to charge any of the three men involved in the incident.

“We will question witnesses before deciding on whether or not to pursue criminal charges,” Col Jamroon said.