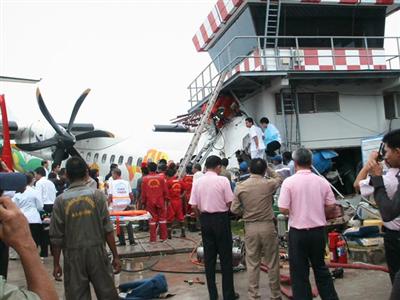 PHUKET / SURAT THANI: The chairman of the Southeastern Thai Hotel Association is confident that Tuesday’s Bangkok Airways plane crash at Samui Airport will not affect tourism on the island.

Ruangnam Jaikwang said he believed ‘tourists would understand that the crash was an accident.’

The Bangkok Airways plane skidded off the runway before crashing into an old control tower.

The accident killed the captain of the flight and injured many others, mostly foreign tourists.

Co-pilot Thanawat Premruethai is still in critical condition at Bangkok Hospital in the capital.

“I was shocked when I felt the impact. Then I saw a spark of fire and tried my best to jump out of the emergency exit because I was worried the plane would catch fire,” one survivor said on condition of anonymity.

“Thai officials have taken good care of me,” she said.

“Other passengers are now staying in hotels. A team of medical workers and psychiatrists are there to take care of them,” Mr Puttipong said.

He extended his condolences to the victims, their families and friends.

“I wish them all a speedy recovery,” he said.

Mr Puttipong said his company would provide full assistance to the families of Mr Thanawat and the late Captain Chartchai, whose elderly father cried inconsolably on Thai television last night.

An investigation is currently underway to see what caused the accident.

It will involve an analysis of data on the plane’s ‘black box’ flight recorder.

Transport Minister Sophon Saram told a Cabinet meeting that wind gusts during landing appeared to be the most likely cause.

Samui Airport, which was closed immediately after the accident, re-opened yesterday afternoon.

The crash was not the first at Samui Airport, a private facility owned by Bangkok Airways.

In November 1990, a Bangkok Airways flight crashed at Samui while attempting to land in heavy rain and high winds. All 38 people on board were killed.

Ultimate Frisbee takes off in Phuket