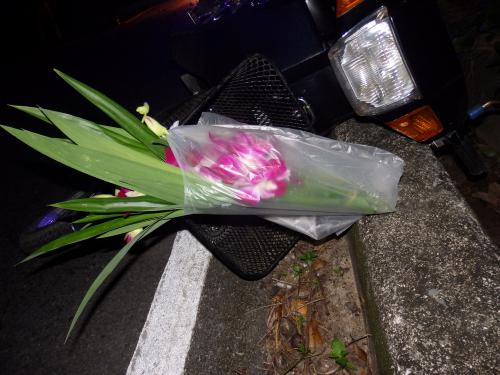 PHUKET: A man carrying a full-face helmet was found dead on the airport bypass road after falling from his motorbike early yesterday morning.

Police were called to the scene, about one kilometer from Thepkrasattri Road (map here), at 2:30am.

“It seems as if he lost control of his bike, and hit his head on the road,” he said.

Officers found a full-face helmet nearby.

“It was likely he was not wearing it when the accident happened,” Capt Santi told the Phuket Gazette.

Officers noted that there were flowers in the motorbike’s basket and in a plastic bag on the ground near the crash site.

“It looked as if he planned to use them during a temple visit later that morning, as yesterday was a Buddhist day of worship,” Capt Santi noted.

Thawatchai Pimphan, 21, called the police after hearing the accident.

“I was taking a pee by the side of the road when a motorbike travelling at a high speed passed by,” Mr Thawatchai told the Gazette.

“Moments later I heard the bike crash. I rode my motorbike in the direction of the sound and found Mr Thanapon on the road about 300 meters away,” he said.

Police are continuing their investigation in the hope of determining the cause of the accident.

“The body was sent to Thalang Hospital, and we will wait for confirmation by doctors for the cause of death before we go ahead with further questioning,” he said.