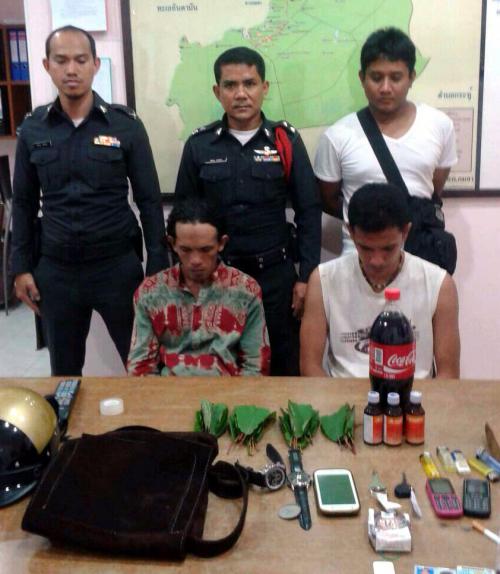 PHUKET: Police in Kamala, on Phuket’s west coast, nabbed two men cooking up a batch of the illegal drug cocktail “4×100” at a workers’ camp on Friday.

“Plain clothes police informed us that two men, Aekkaluk Phanchalard, 29, and Suthep Abdulsamak, 42, were making 4×100 at the camp,” explained Lt Suchart Chompooseang of the Kamala Police.

Uniformed officers quickly assembled a squad and raided the men’s accommodation. Inside, they found Mr Aekkaluk and Mr Suthep in the middle of making a kratom brew.

In addition to the pot of boiling kratom leaves, officers seized 40 kratom leaves that were in a pile on the floor.

“The men also had a bottle of Coca-Cola, three bottles of cough syrup and a plastic bag containing 50 grams of marijuana,” Lt Suchart told the Phuket Gazette.

4×100 is made with four ingredients: kratom leaf extract, cough syrup, cola and ice.

“They were both charged for the possession of [kratom and marijuana] and the production of [4×100] a category 5 narcotic,” Lt Suchart noted.