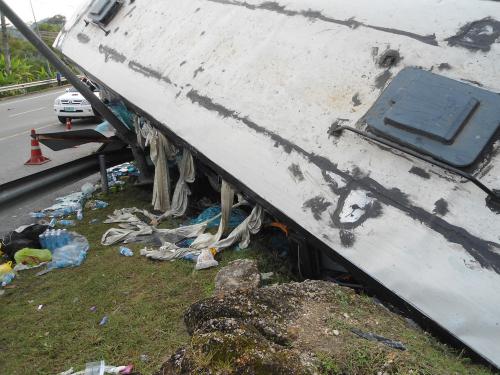 PHUKET: Police have given a Phuket tour bus driver seven days to present himself to face charges for the Patong Hill accident that saw 49* university students rushed to hospital Saturday afternoon.

The 32-year-old driver, Manit Sawadee, is to be charged with reckless driving causing serious injury.

The bus Mr Manit was driving plunged backward and slammed into a roadside ditch as he attempted to climb the hill.

All 49 Asian Institute of Technology students on board were rushed to hospital, one of them reportedly sustained serious head trauma in the crash (story here).

“If Mr Manit does not present himself within seven days, we will issue a second summons for him to present himself. If he still fails to turn himself in, we will request a warrant for his arrest,” Capt Witaya Sinchumrern of Thung Thong Police told the Phuket Gazette this afternoon.

Mr Manit will also face charges for causing property damage, Capt Witaya said. The tour bus pulled down power cables and utility poles when it slammed into the ditch.

“They reported that the bus driver was at fault, as he was inexperienced in driving over Patong Hill,” Mr Terayout said.

“We checked with the bus company, Tao and Friends Limited Partnership, and the bus had passed its annual safety inspection, and its registration is valid,” he said.

“We could see that the drive shaft was sheared off,” he said. “We think Mr Manit tried jamming the manual transmission bus into a low gear after it started rolling backward, but the drive shaft couldn’t take the strain.”

Despite police advocating that Mr Manit be charged for reckless driving, Mr Chanchai believes that the driver did his best to recover after the bus had started to roll backward.

“From what we saw during our investigation, the driver did everything he could. We saw the handbrake had been pulled, but when you have more than 20 tons of bus, including people and luggage on board, it is very difficult to recover once the bus starts sliding downhill,” he said.

Mr Chanchai even praised Mr Manit’s efforts to minimize the possible injuries to be suffered in the impact.

“Most importantly, he did not let the bus go down the hill in the same lane he was driving uphill in. If he did, a lot more people, such as those in the cars behind him, would have be injured,” Mr Chanchai said.

Regardless, PLTO Chief Terayout holds Mr Manit fully responsible for the accident and the subsequent injuries.

“It’s all the driver’s fault. An experienced driver would know how to control a bus that is rolling backward. This driver might not have experience driving on such hills,” Mr Terayout said.

“This case is different from brake failure, so officers will not charge the bus company,” he said.

Meanwhile, all 38 students who were admitted to Patong Hospital for injuries sustained in the accident were discharged this morning, confirmed Capt Witaya.

“However, 11 students remain in Bangkok Hospital Phuket,” he said.

“The man who suffered serious head injuries is much better. He is now resting and recovering at Bangkok Hospital,” he said.

The bus was recovered at about 4pm today.

“It took two days to get the right crane and an appropriate vehicle to remove the bus,” Capt Witaya explained.

“It was taken to a vacant lot on the bypass road, where it will stay until the bus company makes the necessary arrangements for it. The bus company will cover all the expenses of recovering the vehicle,” he said.

* The Gazette‘s original report stated that only 44 students were on board and taken to hospital.