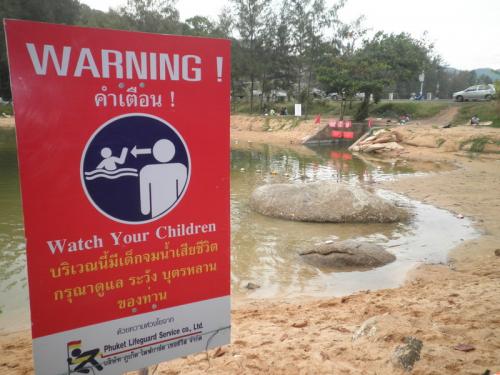 PHUKET: Following a Russian boy about 9 years old almost drowning at Nai Harn lagoon yesterday, the chief lifeguard at the popular Nai Harn Beach (map here) has called for parents to keep a close eye on their children playing in the water over the Songkran holidays this weekend.

Nai Harn chief lifeguard Jula Nontree told the Phuket Gazette this afternoon that the Russian boy was pulled from the lagoon at about 5pm yesterday and rushed to hospital.

Staff at Vachira Phuket Hospital in Phuket Town confirmed the boy was safe and had been discharged from hospital care.

“Our lifeguards will be patrolling the beach and the lagoon during the coming holidays,” Mr Jula said.

“However, we urge parents to keep a close watch on their children playing in the water. It is school holidays and this weekend is Thai new year, which means many families with children will be coming to Phuket – and children love to play in the lagoon,” he added.

“We have already seen several children come to play in the lagoon without their parents present, so we want parents to pay more attention to their children when they go to play in beach areas,” Mr Jula said.

The lagoon at Nai Harn has proved lethal for children playing without adult supervision.

Six-year-old Supathanwa Choophuek was pulled from the lagoon by lifeguards on February 5 last year, but was pronounced dead on arrival at hospital (story here).

The death of young Supathanwa followed that of seven-year-old Methee Khunsuinhu, who was pulled unconscious from the lagoon by lifeguards on January 1, 2012 (story here). He died four days later in hospital (story here).