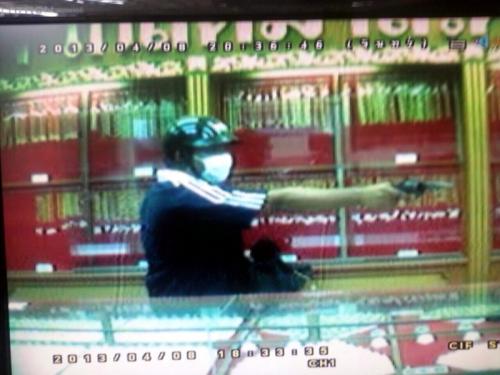 PHUKET: Though the identity of the man who robbed a gold shop and killed a man on Monday night is still unknown, there is now a warrant out for his arrest, and the bounty on his head has been doubled to 400,000 baht. (Story our earlier story here.)

Phuket Provincial Police Commander Choti Chavalviwat has told the media, “We believe the robber is still in Phuket. The images captured by CCTV during the robbery were used to issue the warrant.

“The arrest warrant is issued for the man, name and family name unknown, who carried a gun into a public area, robbed and murdered,” Maj Gen Choti said.

“The gold shop owner offered to raise the reward to 400,000 baht for information leading to the arrest of the robber and offered 100,000 baht more to support Mr Apichet’s funeral,” he added.

“We have more information about the robber from witnesses’ statements. We are working to summarize all the details, collect more evidence and question more witnesses. We will try to find the robber and arrest him as soon as possible,” he explained.

Phuket Cricket 7s start in a blaze of glory