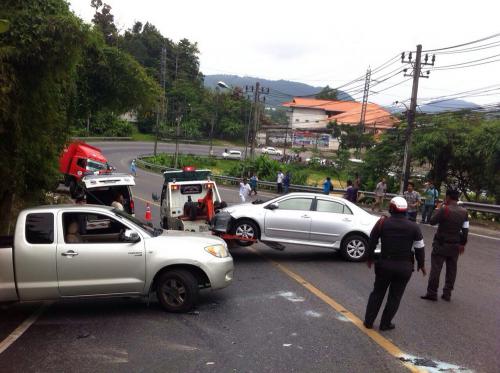 PHUKET: A Thai Post lorry that failed to make the steep climb up Patong Hill yesterday afternoon, faltered then careened backward down the hill, slamming into cars and pickups as it went.

“The truck slid down the hill at about 2:15pm. It ended up stopping at almost the same spot as the student bus that rolled backward down the hill two weeks ago [story here],” said case inspector Maj Sakchai Chunyong of the Thung Thong Police.

“Fortunately, no injuries were reported this time,” Maj Sakchai added.

Rescue teams and police took nearly two hours to clear the wrecks – four vehicles in all – from the busy road.

“Traffic could pass the site unhindered by about 4pm,” Maj Sakchai said.

“Mr Boonsong said he lost traction because the road was slippery from rain and he was not used to driving up that particular steep hill,” Maj Sakchai explained.

“This is what caused the truck to roll backward, hitting three vehicles that were behind him,” he added.

Maj Sakchai urged all motorists to pay careful attention when driving on Phuket’s steep hills, especially when the roads are wet.

“Small vehicles, please try to not cut in front of big vehicles, and if you can avoid following too closely behind them, then please do,” he said.