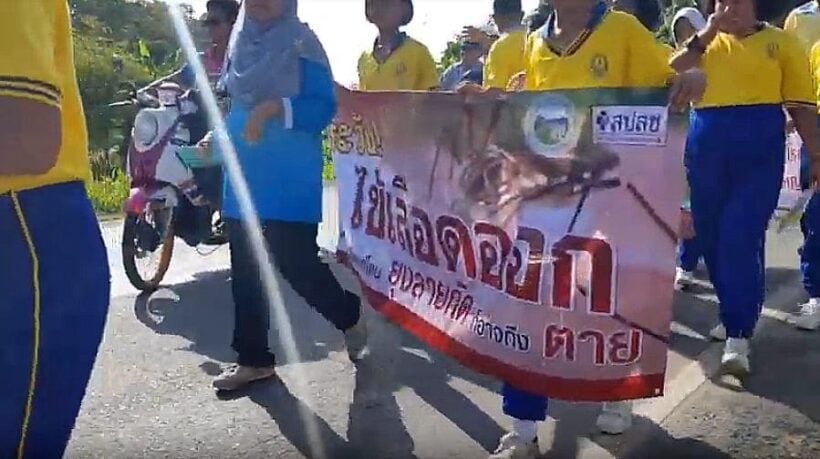 Rawai and Nai Harn locals in southern Phuket, along with the Rawai Or Bor Tor Mayor Aaron Solos, protested this morning about the rise in Dengue Fever cases in the area.

They say they are concerned about the high rates of contracting the virus in the south of the island and are calling on the provincial government to pay more attention to preventative resources, including spraying and educating locals to maintain the areas around their house to remove the breeding grounds for mosquitos.

In 2018 there were two deaths from Dengue in Phuket – one in Rassada and one in Mai Khao.

The province of Phuket has recorded the highest death rate due to dengue fever nationwide. Of the 357 reported infections, two infected people have died. (Data: First half of 2018)

Phuket figures highly in the statistics due to its high transient population and the many mangrove areas along the east coast, a favorite breeding ground for mosquitoes. The island is also littered with old tin mine lakes that are filled with stagnant water.

According to the Ministry of Health’s Bureau of Epidemiology, a total of 50,079 cases have been reported from the 77 provinces up to August 27. 65 of those cases died from complications related to the disease.

Dengue fever is an infectious disease carried by mosquitoes in mostly tropical zones around the world. Dengue used to be called “break-bone fever” because it often causes severe joint and muscle pain that patient’s describe feels like bones are breaking.

People contract the dengue virus from the bite of an infectious Aedes mosquito – you can’t get dengue from another human.

Car driver killed after colliding with pickup on Bypass Road