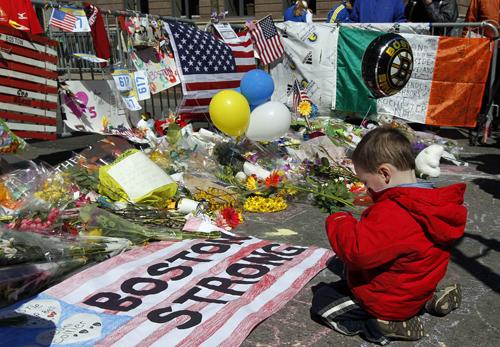 Dzhokhar Tsarnaev, 19, who suffered damage to his tongue when shot through the throat before his arrest, was initially under sedation and incapable of being interviewed by investigators, authorities said. He also had been shot in the leg.

But the ABC and NBC news networks reported last night that Tsarnaev had regained consciousness and was responding in writing to questions put to him by authorities.

Much of investigators’ attention has turned to a trip his older brother and fellow bombing suspect, Tamerlan Tsarnaev, took to Russia last year and whether Chechen separatists or Islamist extremists may have influenced or assisted the siblings.

The two brothers emigrated to the United States a decade ago from Dagestan, a predominantly Muslim region in Russia’s North Caucasus mountains.

Tamerlan Tsarnaev, 26, died after a Thursday night gunfight with police on the streets of Watertown, the Boston suburb where authorities finally cornered his younger brother after a massive manhunt that shut down greater Boston on Friday.

Dzhokhar Tsarnaev, a naturalized U.S. citizen, was found spattered with blood and hiding inside a covered boat parked in a Watertown back yard. He apparently was hit by gunfire in the shootout that left his brother dead, but it was not clear whether he suffered additional wounds in a final hail of bullets that preceded his capture.

U.S. Attorney Carmen Ortiz, the federal prosecutor for the Boston area, was preparing criminal charges, according to Boston Police Commissioner Ed Davis. It was not clear when charges would be filed. Prosecutors did not plan any news conference or announcements.

The suspect was watched by armed guards in the intensive care unit of Beth Israel Deaconess Medical Center, where his brother was pronounced dead early on Friday.

“He is not in a condition to be interrogated at this point in time,” Davis said in an afternoon news conference.

Davis said earlier police discovered at least four unexploded devices, including one similar to the two pressure cooker bombs used in the twin blasts Monday that killed three people and wounded more than 170 near the finish line of the Boston Marathon.

“I personally believe they were (planning other attacks),” he told CBS television’s “Face the Nation.”

The men’s parents, who moved back to southern Russia, have said their sons were framed.

Tsarnaev was shot in the throat, U.S. Senator Dan Coats, a member of the intelligence committee, told ABC. A source close to the investigation told Reuters he had tongue damage.

“We don’t know if we’ll ever be able to question the individual,” Boston Mayor Thomas Menino said , also on ABC’s “This Week” program.

Runners in the London Marathon held 30 seconds of silence before starting their race yesterday, while people from the greater Boston area that had been on virtual lockdown all day Friday remembered the victims in church services.

“We must be people of reconciliation and not revenge,” Roman Catholic Cardinal Sean O’Malley told a packed Cathedral of the Holy Cross. “The crimes of the two young men must not be justification for violence against Muslims.”

In the neighbouring city of Cambridge, police stationed themselves across from a home where various members of the Tsarnaev family had lived, advising gawkers and bystanders to move on.

Patricia McMillan, who lives two doors down, said she last saw Tamerlan Tsarnaev in the neighbourhood the Wednesday before the bombing, noting he had shaved off his beard and that he was smoking.

Cartes won with a 9 or 10 percentage point lead over Efrain Alegre of the ruling Liberal Party, the head of the country’s electoral tribunal said.

Alegre conceded defeat while thousands of Colorado Party supporters wearing red shirts and scarves honked horns and blasted music in the capital Asuncion, celebrating their party’s return to power after its 60-year reign was interrupted in 2008.

Cartes is a political novice who had never even voted before joining the Colorado Party four years ago.

He has vowed to reform the party, which is notorious for corruption. Its long period in power included General Alfredo Stroessner’s 1954-1989 dictatorship.

Cartes had about 46 percent support and Alegre trailed with about 37 percent with results in from more than three-quarters of polling stations.

With Cartes as president, Paraguay will have a right-leaning government, bucking the trend in South America where leftists have made steady gains in recent years. Only Colombia and Chile are ruled by conservatives.

Congress ousted Lugo, a leftist and former Roman Catholic bishop, after finding him guilty of mishandling a land eviction in which 17 police officers and peasant farmers were killed.

Some of Paraguay’s neighbors likened the two-day impeachment trial to a coup and imposed diplomatic sanctions on the South American nation.

“There was a coup (against Lugo) because he was the only person capable of defeating the Colorado Party after 60 years. And he will be the only one to have done it in another 100 years,” said Fernando Franco, 38, who works as a hospital security guard. “The Colorados won’t be defeated again.”

Nearly 40 percent of Paraguay’s 6.6 million people are poor. The landlocked country relies on soybean and beef exports, but it is also notorious for contraband trade and illicit financing.

One of Paraguay’s wealthiest men, Cartes primarily made his fortune in the financial and tobacco industries. Rivals have tried to link him to drug running and money laundering, but he has never been charged with those crimes.

“The accusations made during this campaign have no truth to them, and personally I am very serene,” the typically brash and outspoken Cartes told reporters.

Alegre, a more somber politician, led corruption probes in Congress. But his reputation as an honest administrator was undermined by an investigation into whether he misappropriated state funds while serving as Lugo’s public works minister.

International observers said they had received no complaints of fraud during the election.

Paraguay’s current president, Federico Franco, was barred by the constitution from running for re-election even though he is just serving out what remained of Lugo’s five-year term. He will hand over the presidency in August.