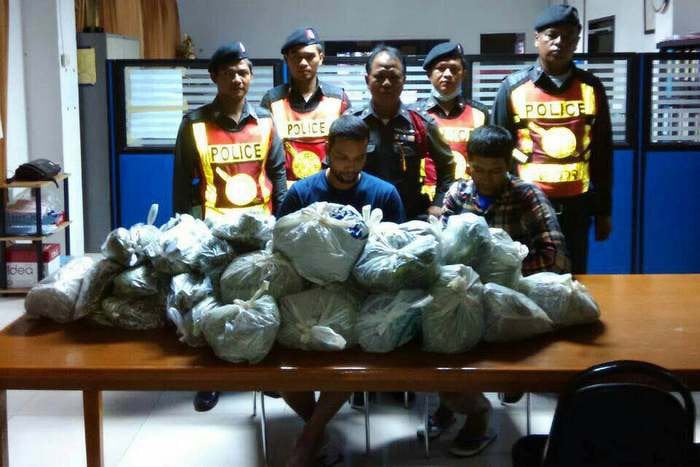 For an in-depth look at kratom culture in Phuket and Thailand, pick up a copy of the Phuket Gazette hard-copy newspaper, available in Phuket, Bangkok, Pattaya, Hua Hin and Koh Samui on Saturday.

PHUKET: Three suspects were arrested in two separate operations in Phuket Town and Thalang this week for allegedly having a total of 70 kilograms of kratom leaves in their possession.

On Tuesday, Songkhla native Paosi Yooso, 32, was arrested in his rented room in Phuket Town with 40 kilograms of kratom after police discovered through his Facebook posts that he was selling the illegal drug.

“We set up a sting operation to buy two kilograms of kratom from him. After we arrested him with the drugs, we took him to his home, and found 38 more kilograms there,” said Phuket City Police Deputy Superintendent Khunnadet Nanongkhai.

Mr Paosi was charged with possession of a Category 5 drug with intent to sell and was taken to Phuket City Police Station.

“He confessed to the crime and accepted the charges,” said Lt Col Khunnadet.

Then, early this morning, two suspects were arrested and 30kg of kratom seized from them during a random check at the Tah Chat Chai checkpoint.

“Truck driver Pairoj Oopatham, 33, and Pairin Oopatham, 22, were delivering kratom leaves from Phang Nga to Phuket in a pick-up truck. The kratom was hidden under the back seat of the truck,” said Tah Chat Chai Police Deputy Superintendent Nikorn Choothong.

During questioning, the suspects admitted that they had bought the drug in Phang Nga for 20,000 baht and were planning to sell it in Thalang.

“Both were charged with possession of a Category 5 drug with intent to sell, and both accepted the charge,” said Lt Col Nikorn.

The men were taken to Tah Chat Chai Police Station.