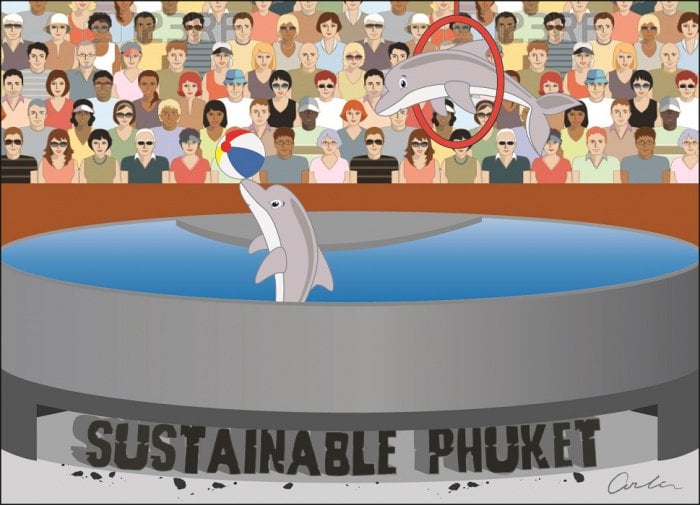 PHUKET: The Phuket Gazette endorses the recent call by SKAL and several other groups in petitioning Tourism and Sports Minister Kobkarn Wattanavrangkul to put to an end, once and for all, to the plans to open a “dolphinarium” in Chalong.

In their letter to the minister, SKAL makes a succinct yet highly compelling 12-point argument against the dolphinarium, which has already been constructed with funding from Ukranian investors.

There is no doubt that public opinion here in Phuket is overwhelmingly opposed to a dolphinarium anywhere on the island. A Gazette online readers’ poll conducted last year, after news of the facility’s construction broke, found that 98% of tourists were opposed to it. Internationally, more than 17,000 people have already signed an online petition launched by the Sea Shepherd Global Conservation Society, which is just one of several high-profile international NGOs that have rallied together to oppose the project.

The many arguments against the dolphinarium are too extensive to be cited here in full. In addition to serious legal and safety concerns, the opening of such a facility would severely damage Phuket’s reputation as a sustainable and eco-friendly tourist destination – especially since the dark secret of how dolphins are brutally captured in the wild, at places like Japan’s notorious Taiji Cove, was revealed in the 2009 Academy Award winning documentary The Cove.

The only argument in favor of a dolphinarium that we are aware of is financial. The strategy is apparently based on attracting busloads of packaged tourists from places like mainland China and Russia. We feel it insulting to presume that people in these market segments lack sufficient awareness of the issues involved, especially at a time when countries as diverse as the United Kingdom and India have comprehensively banned the capture and display of cetaceans for human amusement and profit.

Some readers might harbor positive childhood memories about going to a dolphin show, but that was a different time – before it was revealed just how badly marine mammals suffer, physically and psychologically, in captivity. These truths have been clearly revealed by former dolphin trainers and handlers, most notably former “Flipper” trainer Ric O’Barry, whose organization ‘Dolphin Project’ is actively campaigning to stop the Phuket dolphinarium.

A more detailed argument against a dolphinarium entitled ‘The Case of Opposition to the Phuket Dolphinarium’ breaks down in great detail the numerous flaws with this project and the dangers it carries for Phuket’s image and environment.

The interim government of Prime Minister Prayuth Chan-o-ocha has correctly tackled the very difficult issue of Illegal, unreported and unregulated (IUU) fishing practices in Thai waters. We hope they will also consider using the special powers under Article 44 of the interim charter to ban the future development of any facilities in Thailand that would involve public display of cetaceans, and to incorporate this directive into the country’s 20-year “development plan” currently being drafted in Bangkok.

Opinion: The lay of the land