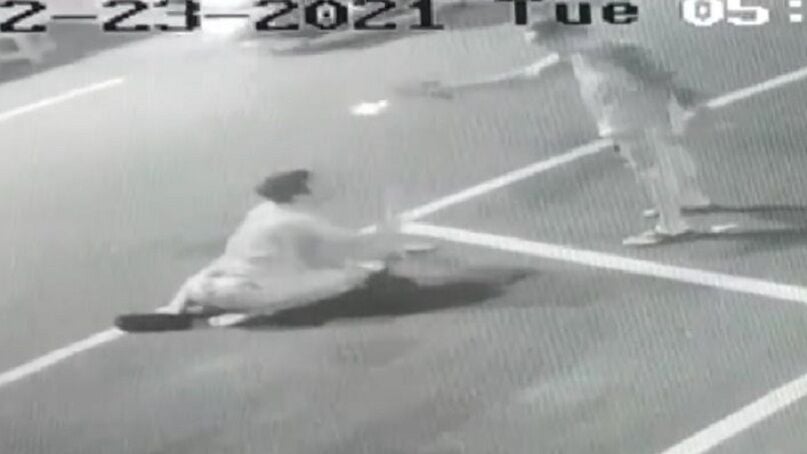 The (former) Phuket police officer that allegedly drunkenly shot Aroon Thongplab, a 25 year noodle seller, is now pleading not guilty. He plans to see his day in court, instead.

Pornthep Channarong allegedly shot Aroon in the stomach last Febrraury as Aroon was retrieving a noodle bowl from a customer. Pornthep was soon relieved of duty and currently faces charges of attempted murder, carrying a firearm in a public area with necessary reason, and firing a weapon in a public area.

CCTV video captured Pornthep (allegedly) shooting Aroon and then mocking the wounded man. He also (allegedly) kicked Aroon on “the backside” as Aroon lay in agonizing pain, asking for mercy. The move did not sit well with the local community, the nation, and the world.

Albeit, despite the video evidence, Pornthep has entered a plea of not guilty, says Aroon’s lawyer, Kerdphol Kaewkerd. Kerdphol told Thai media that Pornthep had initially entered a guilty plea when he was questionedoned on May 19. Kerdphol adds that at the time Pornthep did not have a lawyer and the court appointed him one.

The lawyer speculated that Pornthep may have entered his guilty plea because his lawyer at the time advised him to do so. However, Kerdphol admits this is speculation on his part. He went on to say that Pornthep is denying all the charges against him, and said, somewhat incriminatingly that he (Pornthep) never had an argument with Aroon and didn’t have “any intention to kill him”.

“[I] shot Mr Aroon as he was trying to stop foreigners from arguing. He said he fired the gun into the air three times”. And that Aroon approached him which, to Pornthep’s thinking, wasn’t “practical”.  Thus, he shot Aroon because he considered him a “bad man”.

Kerdphol adds that “the court will hear witness testimonies and examine evidence again on August 23”.

Aroon, who was paralysedby the gunshot, has been released from the hospital and is currently being taken care of at home at a family home in Patong.

Aroon’s lawyer is asking for 15 million baht in damages. he cites “compensation for his paralysis, as well future costs of living, and lost opportunities and income that came from being shot and subsequently paralysed.

Craig
Not guilty due to overcooked noodles.

Scott
This tragic and horrific incident disturbed me tremendously.  Obviously, there needs to be sophisticated physiological screening on a routine basis for all police officers.  Tremendous damages must be paid to the unfortunate victim of this needless and unjustified act of…