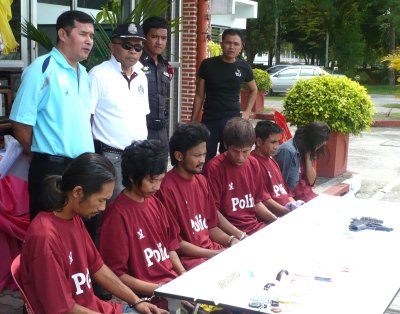 PHUKET: Acting on a tip-off police raided two separate addresses in Phang Nga yesterday resulting in the arrest of six men and the recovery of drugs, weapons, cash and other valuables.

The gang was reportedly controlled by an inmate at Nakhon Sri Thammar at Provincial Prison who ordered drugs to be delivered to one of the suspects netted in the raid.

“Following reports of people suspiciously coming and going at the house, we decided to investigate. As a result we discovered that it was being used as a drug distribution point for local teenagers,” Col Tharatcha said.

“So as not to alert the house occupants we divided into teams, one to cordon the area and a specialist team to enter the property, as we believed they may have been armed,” he explained.

“In the end we caught them before they were aware of us,” he said.

“In the house we seized 157 ya bah [methamphetamine] tablets, a quantity of ya ice (crystal methamphetamine) and 56,000 baht in cash,” Col Tharatcha said.

“Other evidence seized included a vehicle registration plate for a Nissan March, a motorcycle, various items of jewelry and two bankbooks,” he added.

Asa result of information gained from the scene, a specialist police unit mounted a hasty operation to interdict a drug delivery that was about to happen in the area. That operation ended with three more suspected drug dealers in custody.

Roongrote Pantakua, 30, was arrested in possession of two ya bah pills and Amornthep Saetun, 22, with three packages of dried marijuana, approximately 12 grams in total. Both men are from Tambon Bang NaiSri in Takuapa.

The sixth suspect, Chem Taweewat, 44, from Muang Ranong District, was arrested in possession of a 9mm automatic pistol and 12 rounds of ammunition, said Col Tharatcha.

All six suspects were taken to Takuapa Police Station for further questioning where Col Tharatcha reported that they confessed to working together as a drug – dealing network.

“Mr Chiaw ordered ya bah and ya ice from the main dealer, a prisoner in Nakhon Sri Thammarat Provincial Prison. The main dealer then ordered his men by phone to deliver the drugs to Mr Chiaw at the appointed time,” the colonel explained.

“Most times they delivered the drugs to Baan Kong Tak on Southern-Krabi-Surat Road, which forms the border between Muang Surat Thani and Kanjanadit Districts of Surat Thani. From there Mr Chiaw took the consignment and stored it in the house at Kokkian,” he said.

“Once there, Mr Santichai and the other suspects would sell the drugs,mostly to teenagers in the Takuapa area. Later, the money would be wired to the dealer,” said Col Tharatcha.

“Police will continue the investigation to identify the source of the drugs,” Col Tharatcha added.