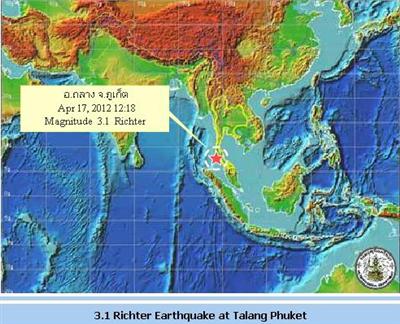 PHUKET: The eight small earthquakes that have rocked Phuket over the past 24 hours are most likely related to the much larger earthquakes off the coast of Sumatra last week, experts from the Thai Meteorological Department (TMD) said.

The latest quake, which hit at 12:18pm today, was a magnitude of 3.1 on the Richter scale, according to preliminary data released by the TMD website.

The previous tremors dating back through yesterday, all centered in Thalang, were as follows:

TMD explained that the 8.9 Richter earthquake off Sumatra on April 11 likely affected all 13 known faults in Thailand.

The source of recent activity in Thalang is the 130-kilometer-long Klong Marui Fault that runs beneath Phuket and Phang Nga.

TMD spokesperson Phuwiang Prakammi said on the Nation Group’s Rawangpai (Disaster Watch) Channel that he had discussed the recent earthquake activity with fellow seismologists and there was a consensus that the Thalang – centered tremors likely represented an ongoing adjustment to the much larger earthquake last week.

“It may have an effect on all 13 faults in Thailand, which may need a period of time to adjust before things return to normal,” he said.

The Thai fault zones were not directly related to the active fault zone off Sumatra, which has been the source on numerous aftershocks in recent days, he said.

Mr Phuwiang said aftershocks with magnitudes greater than 5.0 Richter pose a risk of significant damage, but that earthquakes less than 4.0 Richter should not be a source of panic.

“Normally aftershocks are not as strong as the main quake; some are hardly even detectable. However, we will continue to monitor the situation closely,” he said.

In Bangkok, Prime Minister Yingluck Shinawatra ordered the Ministry of Interior to monitor the ongoing seismic activity in Phuket and insisted that the Government was not being lax in its efforts.

Deputy Prime Minister Yongyuth Wichaidit had been assigned to oversee the government effort, she said.

Authorities were working to fix some of the National Disaster Warning Center’s network of 69 tsunami warning towers along Andaman Coast, some of which malfunctioned last Wednesday, she admitted.

Officials have also been instructed to inspect old buildings and historical sites for damage, she told Thai-language daily Thai Rath.

In order to prevent future breakdowns in mobile-phone networks of the kind that followed last week’s earthquake, she urged the public to try and communicate by text messaging during emergencies, Thai Rath reported.