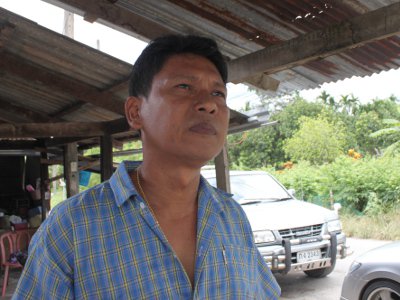 “We were inside at about 4:30pm when we heard a loud noise and then the house shook for about four seconds. We rushed outside at the same time as our neighbors did,” he said.

“After that up, until 8pm, there were another three aftershocks, but they weren’t as strong as the first,” he said.

“Although we stayed outside until late night I was still nervous when I went to bed and I didn’t sleep well at all,” Mr Somnuek added.

Duangjai Treesuk, 58, was at home with three friends when they heard a loud noise. “It sounded like thunder and my neighbor shouted that it was an earthquake. Suddenly my house was shaking and we were being shaken too. We immediately ran outside,” she said.

“I have diabetes and I was in so much of a panic that I was pale and my hands were shaking. I tried to phone my husband but I just couldn’t get through,” Ms Duangjai said.

“Then,while I was standing in front of my house a piece of cement block fell from my house. I nearly went into shock,” she added.

“I called the Municipality Office at about 6pm for them to come around and look at the damage to my house. They arrived at about 8pm, bringing the press and media with them to inspect the cracks that had appeared in my house as well as other houses,” she said.

“They can now estimate how much damage has been done so they will be able to give us the money to make repairs,” Mr Somnuek said.

Manor Murikabutr, 50, offered to show reporters from the Phuket Gazette the rift in his land that appeared after the earthquake that caused the December 2004 tsunami. Villagers were more curious than worried as they speculated whether the rift would get bigger with more seismic activity.

Soon after the 2004 event the rift was some 20 meters long with a drop of nearly one meter between the two sides. Observers today noted that not much had changed save for the abundant growth of vegetation now filling in the gap.