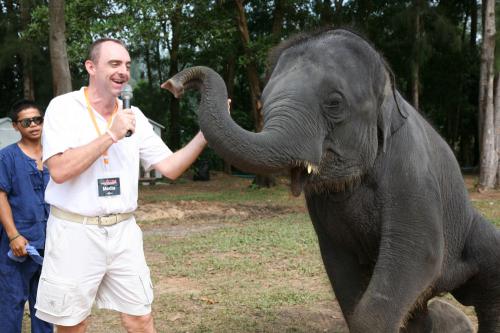 PHUKET: Paul Norris, the renowned ‘DJ Doris’ from Phuket Island Radio 91.5FM, will be honored in Phuket with a “Celebration of Paul’s Life” memorial on February 5.

The event will be held at the Irish Times pub at Jungceylon in Patong (map here), starting at 7:30pm.

Mr Norris died in an early-morning motorcycle accident on January 12, a tragedy which prompted an outpouring of grief among friends, family and fans (story here).

“People have been coming in to the studio to record their tributes and special messages, which we will air during the show.”

A memorial service for Mr Norris will be held in his home country of Scotland on Monday, at 11:30am at Falkirk Crematorium.

Stan Norris, Paul’s father, posted on Facebook a special message of thanks to the scores of people around the world who sent personal messages of condolence.

“Margaret and I would like to take this opportunity to thank you all for your kind messages and posts. It has been a very difficult time for all of us and we have found great comfort through reading them,” he wrote.

“We are overwhelmed by the love shown to Paul from people all over the world,” he says.

Phuket protesters will not shut down emergency services, leader vows