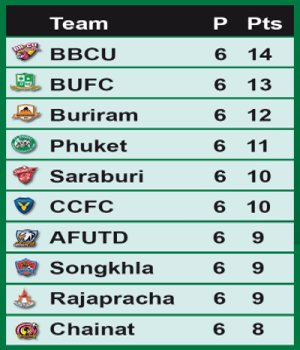 PHUKET: FC Phuket’s mid-week home fixture with Songkhla, originally scheduled for tomorrow night, has been postponed indefinitely by the league – presumably due to the recent flooding.

A huge contingent was expected to be on hand for the match, as tens of thousands of Phuket residents hail from Songkhla and a number of their supporters were planning to travel to Phuket for the match, according the Songkhla FC Fan Club blogsite.

After a scoreless first half dominated by FC Phuket, the Southern Sea Kirin finally took the lead at 53 minutes on a beautiful goal by rising star Niran Phanthong.

But an improbable own-goal off the head of Ibrahim Khulibali at 62 minutes put the one-time Thai Premier League champs even.

Bangkok United took a 2-1 lead at 82 minutes on a 35-yard blast by Frenchman Romar Gusmee that seemed to take FC Phuket keeper Theerawat completely by surprise. Romar was later named “man of the match”.

The win moved Bangkok United past FC Phuket in the standings. They temporarily took over first place in Division 1, but they relinquished that lead the following day when BBCU narrowly beat a hard luck RBAC FC side on the road to go one point clear.

The match was shown live across much of Thailand on the Siamsports Channel, a Thai language channel that broadcasts on TRUE Visions, which is also Bangkok United’s corporate sponsor.

All three goals can also be viewed on YouTube.

For a complete game report, league table, schedule and standings pick up the next hard copy edition of the Phuket Gazette.

Phuket YouTube girl “not dead’, but another woman’s body found