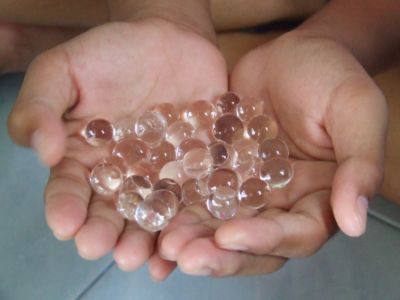 PHUKET CITY: The Department of Medical Sciences in Bangkok continues to puzzle over the small transparent spheres a Phuket family claim ‘dropped from the sky’ onto their roof earlier this month.

Spokesperson Wiriya Panwat told the Gazette, “We still don’t know what they are,” adding that the results of the department’s tests on the objects would not be released until October 8.

Meanwhile, the Gazette has come across a video demonstrating a product called ‘Jelly Marbles’.

Jelly Marbles are marketed by Steve Spangler Science – a company that sells toys which help educate kids about science.

These small, solid spheres are made from hydrogels – water-insoluble networks of polymer chains which are also used in contact lenses and sanitary towels.

Hydrogels are highly absorbent, and can expand in size rapidly after they are exposed to water.

“What starts out as a 3mm pebble, quickly becomes an approximately 20mm ball of jelly!” according to the company’s website.

The family who uncovered the mystery said the spheres appeared after a rain shower.

The resemblance between Jelly Marbles and the Wichit family’s ‘unidentified falling objects’ – which had villagers choosing lottery numbers based on their appearance – is rather uncanny.