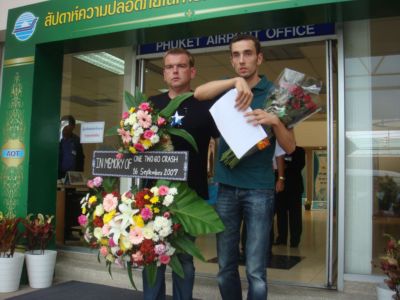 MAI KHAO, PHUKET: On the second anniversary of the One-Two-Go air crash at Phuket International Airport [PIA], two survivors of the accident held a private ceremony of remembrance on the island today.

Marcel Squinobal and Christoph Salchetti, who were both on the plane when it crashed, flew all the way from Germany to pay their respects to their friends Andreas Adelhard and Sabine Schumacher, who were among the 90 people who died.

The two men held a small ceremony at 2:30pm at Nai Yang Temple, before heading to PIA.

PIA Director Pratuang Sonkham and other airport staff joined the two victims for a Buddhist ceremony at the plane wreck, which still lies under canvas on the airport grounds.

Afterwards, the two friends laid flowers on the remains of the plane.

Mr Pratuang told the Gazette he felt a great deal of sympathy for the victims of the crash and their loved ones.

“I feel very sorry about this, but I’m impressed that people are coming all the way to Phuket for the ceremony, after what happened to them,” he said.

When asked why the wreck was still at the airport, he said the crash was still being investigated.

“As soon as that [protracted] process is finished, we will have One-Two-Go come and collect the wreck,” he said.

Phuket UFOs still a mystery – or are they?

Bill Owen: Farewell to a great friend of Phuket