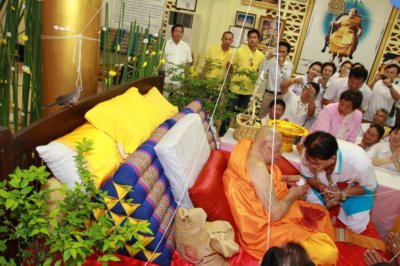 His landmark birthday makes him a teenager for the second time.

The festivities are taking place at his Phuket temple, just off Chao Fa Road West in Chalong.

Luang Pu Supha is reputed to have been born on September 17, 1896, making him four days older than American Walter Breuning, who currently claims the Guinness World Records’ title of ‘Oldest Living Man’.

The Gazette broke the world exclusive story on September 4. For the initial report click here. For an update on the story click here.

The revered monk has built a total of 38 temples in Thailand and is held in the highest regard in much of Thailand.

Luang Pu Supha’s birthday celebrations began yesterday with Buddhist ceremonies in his honor, including a sermon by a leading monk from Chonpratharn-rangsarit Temple.

But today was the big day.

When 119 doves were released from cages in the temple grounds, well wishers were awed as one of the birds flew inside and perched directly behind Luang Pu Supha’s right shoulder and remained there for much of the ceremony.

The announcer called for calm among the excited crowd and announced that “the bird wanted to pay thanks to Luang Pu Supha for its freedom”.

Phuket Governor Wichai Phraisa-ngop is expected to attend the celebrations this afternoon.

Phuket UFOs still a mystery – or are they?