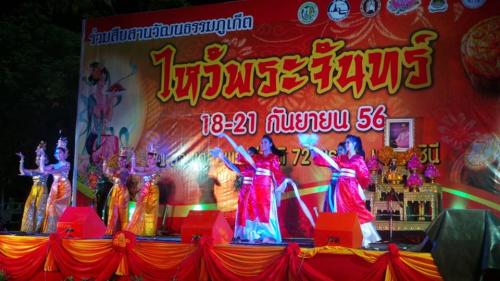 PHUKET: The annual celebration for the Moon Festival got underway in the heart of Phuket Town last night, with Governor Maitri Inthusut officiating at the ceremony to inaugurate this year’s Wai Phra Juntra festivities.

Also at the event at Queen Sirikit Park (map here) was Phuket City Mayor Somjai Suwansupana, officers from the Tourism Authority of Thailand (TAT) Phuket Office and representatives from the Old Phuket Cultural Foundation and the Phuket Peranakan Association.

“The Moon Festival has existed for centuries. It is an important festival for Chinese people and is deeply rooted in their heritage,” said Mayor Somjai.

Festivities will be held at the park from 6pm until 11pm today and tomorrow.

“During the festival, you will be able to buy various kinds of ‘moon cakes’, traditional desserts and local Phuket food,” Mayor Somjai explained.

“There will also be performances by Phuket students and by members of the Phuket City Municipality Elders Club,” she said. “Additionally, there is a photo exhibition highlighting life in Phuket Town in years gone by.”

A key attraction for fans of Thai country music will be concerts by Kluay R-Siam at 8pm tonight and tomorrow.

“The aim of the festival is to preserve the culture and tradition of Phuket, which we want to promote to tourists,” said Mayor Somjai.

Nigerian tourist attacked and robbed of his rented motorbike