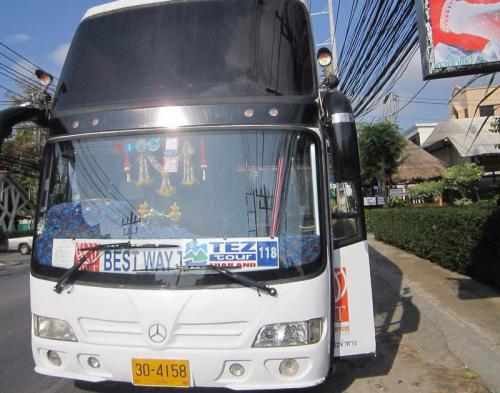 PHUKET: A man parking his motorbike by the side of the road near Chalong Circle escaped with minor injuries this morning when a Phuket tour bus clipped him while trying to avoid an accident.

The bus driver told police that he was en route to Kata when a car cut in front of him near the Sarapan Pleng bar, west of Chalong Circle (map here), Lt Cholada Chokdeesrijan of Chalong Police Station told the Phuket Gazette.

As he attempted to avoid hitting the car, the driver clipped the side of a motorcycle that was being parked by the side of the road.

“The motorcyclist sustained minor injuries to his foot and knee. He was discharged from hospital after treatment,” Lt Cholada said.

“The bus driver was charged with reckless driving causing property damage. He has paid the fine at the Chalong Police Station,” she added.

The police declined to provide names, other than that of tour bus owner Best Way Trip Co Ltd, citing that the case was closed.