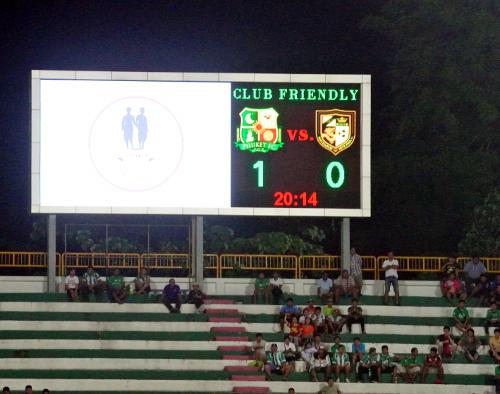 PHUKET: Rebranded and reborn this year as the the “Ronins”, Phuket FC kicked off their 2014 pre-season in respectable form last night, defeating Thai Premier League squad, Ratchaburi Mitrphol FC by a score of 1-0 in an evenly-weighted friendly match at Surakul Stadium.

In two 45-minute halves, under some clouds and periodic light showers, both sides employed a number of promising fronts and as many counter-attacks, but only enjoyed a handful of on-target shots at goal to engage an anxious yet captivated crowd – but to no glorifying avail… until the final moments of unofficial regulation.

The match’s only goal was scored by seasoned forward Anusak Laosengthai in the final moments of the second half, giving the 1,000 or so paying spectators a little something to feel good about on a waning Sunday night.

The goal was set up by a long and nicely weighted missile from Adisek Wisetsin in midfield, on a counter attack, to Myanmar tryout Pai So on the left wing, who in a one-two touch, diverted the ball to Adisak, who’d evaded his marker near the left goal-post.

Adisek sent his shot towards the far post, through the legs of the keeper and out of leg’s length from a sliding Ratchaburi defender.

While the match didn’t yield any other goals, fans finally got to soothe their anticipation and gauge the new-look club’s chemistry and showcasing of talent – some old, but mostly new.

Also making a good impression in their debut for the club was new captain Wasan Natasan and swiftly attacking midfielder Rattapon Auttawong. In addition to Myanmar national team player Pai So trying out for a vacant left-back position in the second half, fans in the first half seemed satisfied with the trial performance of experienced Japanese Terukazu Tanaka, who is used to playing in midfield, showed he can hold his own in the left-back position on both ends of the pitch.

Within the week, the club is expected to make a decision to sign Tanaka and/or Pai So, who will serve as a crucial reserve Asian player for defender Sato. The Asian Football Confederation (AFC) regulations allow Thai clubs to field one additional Asian player in addition to three non-Thai players fielded at any given time, bringing the maximum number of non-Thai players fielded to four.

Last season, Sato was Phuket FC’s only Asian (non-Thai) player and the club was left vulnerable when Sato was out for several matches due to a minor calf-injury.

After the match, Coach Stefano “Teco” Cuagara told the Gazette: “It was a good start to the [pre] season. I’m very happy of our training in the last few weeks and we’re going to continue to work hard.”

Asked about his impressions of Tanaka and Pai So, Coach Teco said: “They’re both good players… I know Tanaka very well and he’s used to playing in midfield, although our vacancy is for the left-back. Pai So’s main position is left-back… although [Pai So] didn’t mark well early on, he was able to adjust his game well in the end. We’ll have to see a few more practices and I’ll talk to the administration before we make our decision.”

Phuket FC’s next match will be on Saturday, January 18 against Russian club FC Forward Vladivostok. Kickoff will be at 6pm. Admission is 100 baht.