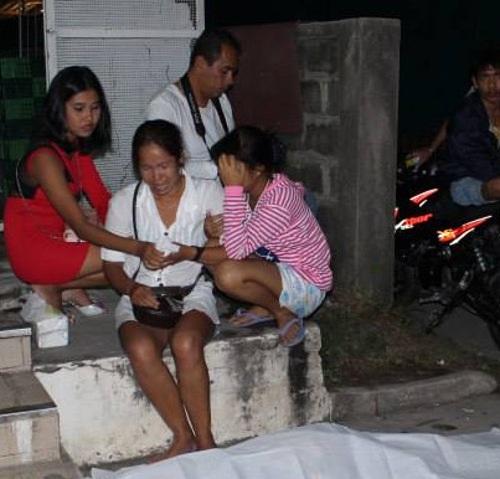 PHUKET: Police have arrested several youths after an 18-year-old was shot dead in front of a 7-Eleven store in Phuket’s Rawai Beach area early yesterday morning.

Chalong Police received a report of the shooting at 4am, and soon arrived at the 7-Eleven store at the entrance to Laem Ka Yai Beach on Wiset Road (map here).

Korrawit Sriboonma, originally from Phetchabun but in Phuket working as a waiter at the Sala Loi Seafood on the Rawai beachfront (map here), was dead by the time officers arrived.

“He had been shot once in the chest,” Wuttiwat Liangboonjinda of the Chalong Police said.

Mr Korrawit’s friend Surachart Pittaratae, 18, told police he and Mr Korrawit, along with another friend, had been drinking at Mr Korrawitch’s rented house in Rawai.

“Mr Surachart and the other friend were riding home when they rode past several youths also riding motorbikes.

“Mr Surachart said the gang ‘stared’ at him, which made him angry, so he followed them, but that only encouraged them to swear at Mr Surachart, saying something about his parents,” Lt Wuttiwat explained.

Mr Surachart went back to Mr Korrawit’s place and told him about the incident. The two went looking for the gang and found them in front of a Family Mart convenience store at the entrance of Soi Salika 2.

“Mr Korrawit and Mr Surachart talked to the teens. The youngsters denied staring at Mr Surachart and said they did not mean to make him upset,” Lt Wuttiwat added.

“Satisfied with the explanation, Mr Korrawit and Mr Surachart headed home, but stopped at the 7-Eleven after Mr Korrawit saw a female friend.

“While he was waiting on the bike, the teens rode past and shot him. He died at the scene,” Lt Wuttiwat said.

Police launched a search and quickly arrested several of the suspects.

The Gazette has been informed that several of the youths have been charged for the shooting and will be presented to the press today.