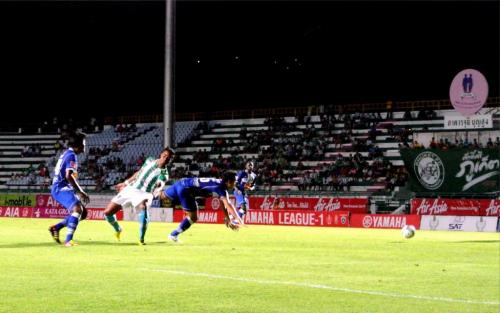 PHUKET: Some 1,653 fans who turned out for the Islanders’ Yamaha League One (YL1) match against Trat FC match on Saturday evening in Phuket Town, were given little to cheer about, the match ending in a 0-0 stalemate.

Indeed, the crowd, representing Phuket FC’s poorest turn-out all season, found more entertainment in the pre-game cheerleader show, as well as the half time showcase of “Mizsy Phuket” finalists, featuring a lineup of blossoming Phuket students vying to be chosen as an official club presenter for next season.

As for action on the pitch, or lack thereof, both sides mildly threatened their opponent’s defensive line in only a handful of chances, but neither side proved deserving of three points.

Speaking to the Phuket Gazette after the match, the Islanders’ Brazilian Head Coach, Stefano “Teco” Rodrigues attributed his side’s lackluster performance to a lack of confidence and motivation.

“Although we trained real hard for this match, we can all see that game-day performance was lacking. Even though we had the better scoring chance, we could not prevail and frankly, both teams did not perform well tonight.

“Now that we’re not going to [get promoted to] the Thai league, many players have lost motivation and confidence to play good football, and this is no good. We must give 100% until the last game. This is our biggest issue right now.”

As a result, both teams retained their YL1 table standings – Phuket in 9th and Trat in 10th place of the 18-team league.

Both teams have 36 points after 29 of 34 matches – Phuket have an even goal difference while Trat have a seven goal deficit.

The Islanders will rest and recover today, set to resume training tomorrow as they look ahead to their next match this Saturday, on the road against the 11th placed Krabi FC, the “Andaman Eagles”, who have 35 points.

Coming off a 4-1 home win over 17th placed Rayong FC last night, Krabi are blood thirsty and look to avenge their loss to the Islanders earlier this season, which was the only Phuket victory over Krabi in the last three years (story here).

The Southern derby will likely be a standing room only affair, though it remains to be seen how many Phuket fans will dare to make the trek to Krabi come Saturday.

In the two sides’ YL1 meeting in Krabi last season, dozens of Phuket fans were held hostage in the stadium well into the night after the two sides drew 0-0 and some unruly Krabi fans had difficulty in swallowing the result (story here).

Saturday’s match will kickoff at 6pm at Krabi Provincial Stadium.