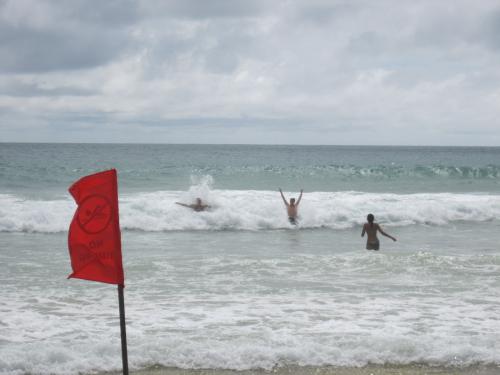 PHUKET: Two tourists, a Chinese and a Russian, drowned within hours of each other yesterday at Karon Beach, on Phuket’s west coast.

Lifeguards reported that both tourists ignored red warning flags marking the area as dangerous to swim.

Oleg Ozerskikh, 52, was pulled from the water unconscious by lifeguards at Karon Beach (map here), at about 11:30am.

Rescue workers sped him to Patong Hospital. He was pronounced dead on arrival.

“Mr Ozerskikh checked into the Hilton Phuket Arcadia Resort & Spa on October 14. He was to check out on Sunday,” Ratthapol Deethongon of the Karon Police told the Phuket Gazette.

“Mr Ozerskikh was swimming in front of the hotel, where red warning flags were posted. He was rushed to hospital, but he died on the way,” he added.

By 3:30pm, lifeguards at the beach pulled Chinese tourist Liu Haifeng, 33, from the water.

Mr Liu was also rushed to Patong Hospital, where he too was pronounced dead on arrival.

“They both could not swim. Lifeguards said they warned them about the dangerous rip currents, but the couple did not believe them and ignored the red flags.

“Mr Liu was caught in a rip current. Lifeguards managed to bring him back to the beach and he was rushed to hospital, but he died en route,” Lt Ratthapol explained.

Police confirmed to the Gazette that the Russian and Chinese embassies in Bangkok were notified of the incidents.