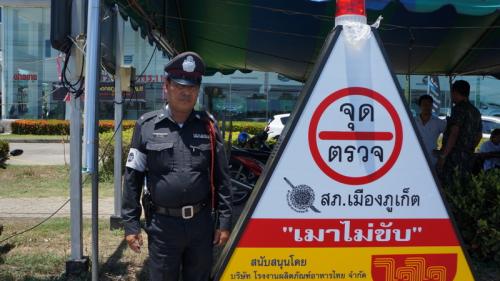 PHUKET: For the first time in years, Phuket has maintained its zero death toll for the first four days of the Songkran Seven Days of Danger national road-safety campaign.

At 2:15am, Guenter Schiele, 56, from Germany, reportedly driving under the influence of alcohol, fell from his motorbike in front of Thalang Technical College (map here). He was taken to Thalang Hospital for treatment of minor injuries.

At 1:30pm, Khanitta Nuansri, 20, from Phang Nga, was riding a motorbike when she was involved in a collision with another motorbike in front of Pha Khlok Municipality Office on the Tah Reua-Pa Khlok Road. She was taken to Thalang Hospital for treatment of minor injuries.

At 7:30pm, Mohameo Abdecaol, 24, from Egypt, was walking beside the road near Phuket Simon Cabaret Show on Sirirat Road in Patong when he was struck by a motorcyclist. He was taken to Vachira Phuket Hospital in Phuket Town, where he underwent surgery for two broken legs yesterday.

– Riding a motorbike without wearing a helmet –153 people

– Driver and/or passengers failing to use seat belts – 20

– Driving under the influence of alcohol – 20

– Using a mobile phone while driving – 19

Last year’s Songkran road toll was three dead and 43 injured in 44 reported accidents in Phuket during the seven-day campaign.

In 2011, seven people died and 52 suffered serious injuries in 43 reported accidents during the same period.