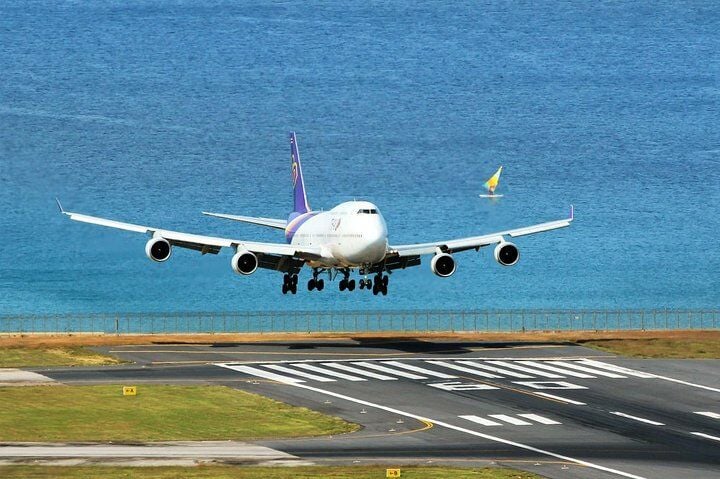 The Phuket Sandbox scheme is off the ground and the desperately needed foreign travellers have begun to trickle back onto the Thai island. The earlier predictions of 1,500 people on the first day were met with just over 20% of that amount actually arriving on the first 4 flights to land internationally in Phuket. But slow and steady wins the race and, over the next few days, a handful of arriving flights will be bringing more and more passengers to the tourist-starved island.

Flights from abroad are scheduled to begin arriving now to Phuket, with the first being an Emirates flight 378 from Dubai. That flight arrived at 12.48 pm, the first international flight of the day. It is now preparing to depart for Bangkok at 2 pm.

The next flight scheduled is QR840 from Qatar Airways arriving from Doha. The flight was delayed slightly and landed at 1:59 pm. That delay meant El Al Israel Airlines flight LY87 from Tel Aviv beat Qatar to land second when it arrived at 1:45 pm.

Later in the evening, after 10 pm, two more semi-international flights are scheduled to arrive as both Etihad Airways and Emirates have connecting flights from Bangkok to Phuket scheduled. Aside from those two flights, 16 other domestic flights from Bangkok are scheduled to arrive from carriers like AirAsia, Nok Air, Thai Vietjet Air, Thai Lion Air, Bangkok Airways, and Thai Smile. Thai Vietjet Air also has one flight in the early afternoon from Chiang Rai.

Tomorrow should see the arrival of the first European flights to Phuket as Thai Airways welcome 3 arriving flights. Overnight flights from Copenhagen and Frankfurt departing now should arrive in the early hours of the morning followed an hour later by a flight from Paris. More on tomorrow’s flight arrivals and passenger numbers in our continuing story.

For more information on how to get into Thailand during the pandemic, Click HERE for help getting your papers in order for your Certificate of Entry.

DWiener
Hiya. I was originally scheduled to fly July 1 but for various personal reasons AND because of the protracted COE process I put it back to Tuesday July 6. Got my COE about 2pm June 30. I'm flying in from…

BlueSphinx
Hi @DWiener, Did you see my response to your post re the STV on which you will be entering Thailand?  Since you will be entering Thailand AFTER 2 July (which is today) you will NOT be able to extend that…
Oracle
Seen lots of photos of arrivals.  All men!  Enough said. I predict Thailand will shortly be added the “red” list of most counties, preventing travel or having harsh return requirements, given increasing Covid cases and few people vaccinated, and authorities in…

King Cotton
5 minutes ago, Oracle said: Seen lots of photos of arrivals.  All men!  Enough said. I predict Thailand will shortly be added the “red” list of most counties, preventing travel or having harsh return requirements, given increasing Covid cases and few…

AussieBob
2 hours ago, DWiener said: Hiya. I was originally scheduled to fly July 1 but for various personal reasons AND because of the protracted COE process I put it back to Tuesday July 6. Got my COE about 2pm June…