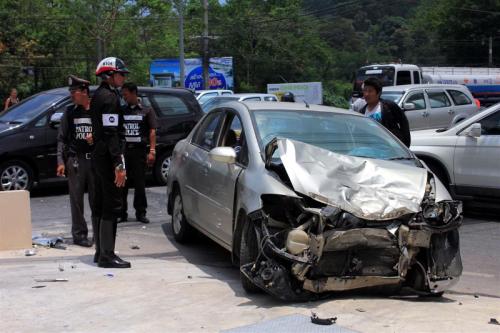 PHUKET: Two Russian students from Phuket’s British International School are tonight still in the intensive care unit (ICU) at Phuket International Hospital after being involved in a horrific motorbike accident on the bypass road yesterday.

Staff at the hospital declined to give details of the students’ condition, but did confirm that both Vlabislan Adrashko and Sevastan Lukashov were still under observation in the hospital’s ICU.

Police are waiting for the two teens to be well enough to question after the accident involving their Honda big bike and a car near Index Living Mall on Saturday.

“At about 1pm on March 30, Ms.Wannakij Maneerat, 39, was driving her car southbound from Lotus on Chalerm Prakiat Road [the bypass road]. She slowed to turn right at the u-turn leading into Soi Bang Yai [map here],” said Wichit Police Sub Lt Somboon Malai.

“As she was turning right, a big bike was heading north from Big C and the two collided. The impact sent the motorcycle 30 meters into a nearby Sino-Portuguese building, where it burst into flames, destroying the bike and damaging the building,” he said.

When police arrived at the scene they found Vlabislan Adrashko, 15, and Sevastan Lukashov, 16, unconscious about 50 meters from the crash site. Mr Adrashko’s right leg was broken and he had a wound on his right knee. Mr Lukashov had also injured his right knee and was bleeding from both ears.

They were taken to nearby Phuket International Hospital.

The front of Ms Wannakij’s Honda was extensively damaged, and both front airbags had detonated.

“We suggest that the car passed in front of the bike,” Lt Somboon said.

“Ms Wannakij’s insurance will pay the hospital bills and also cover the damage to the Sino-Portuguese building” Lt Somboon said.

“Both of the youths are now recovering at the Phuket International hospital. We will question them when they are better, and will then start negotiations with Mrs Wannakij,” he added.