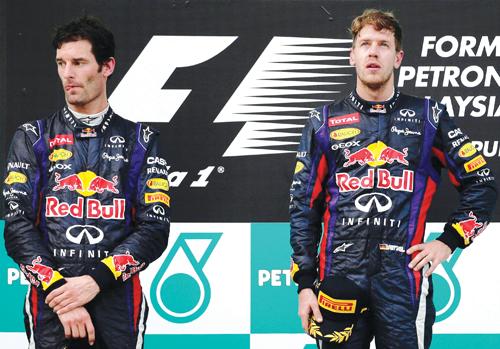 PHUKET: What an unexpectedly delicious race Sepang provided.The race was characterized mainly by sins; sins of omission and sins of commission.

Errors took Ferrari, McLaren, Lotus, and Force India out of contention, leaving only Red Bull and Mercedes to take the first four places. But that summary contains none of the drama that left three miserable men on the podium.

Lotus made a baffling decision to use only one lap to qualify Kimi Räikkönen, who took chances and ended in a pitiable starting position. He lost part of a wing on the first lap, the car misbehaved, and Kimi visited the rough several times. He finished a brave seventh. Fernando Alonso also lost part of his wing, his team failed to pit him for a replacement, and he retired early.

McLaren had significantly improved since Melbourne, and Jenson Button looked to be in for a possible podium finish when a horrible pit stop lost him the race. Force India looked very good until they retired hurt, seemingly with wheel nut problems.

That left Red Bull as one and two, and the best of the rest was Mercedes at three and four. Then the plot took a twist. Hamilton in the lead Mercedes had low fuel and was ordered to take his foot off the pedal. The Red Bulls had tyre management issues, and Mark Webber in the lead was also instructed to slow down. That left two teams with German drivers in second position who wanted to overtake their teammates. Both team managers needed to assure maximum points; the drivers coveted glory.

For Red Bull, Vettel ignored explicit and repeated team orders, and charged past Webber in a hazardous manoeuvre to steal victory. For Mercedes, Nico Rosberg who had managed his race well, and had a chance of pressuring the Red Bulls, pleaded to be allowed to overtake Lewis Hamilton.

That left Vettel looking like a truculent child caught in the cookie jar, a furious Webber, and a shamefaced Hamilton on the podium for what should have been a moment of joy for each.

Alonso is also angry with Vettel whom he blames for causing the accident that destroyed his wing, and ultimately caused him to beach in the gravel and lose a “certain win”. Vettel is in danger of gaining a reputation reminiscent of Schumacher’s unprincipled commitment to winning.

Webber is not the sort of chap to forget pain easily. He said, “There were a lot of things going through my head in those closing laps. Not just from today, but from the past as well.”

Perhaps he was thinking about the 2010 Turkish GP where he was again leading, and Vettel was again second. Webber had again gone into fuel-saving mode when Vettel opted to attack him. On that occasion Vettel’s action caused a collision that cost Webber the lead, and Vettel went out of the race. Or perhaps he was recalling the 2010 British GP when his new improved front wing was passed to Vettel. He won nevertheless and famously commented “Not bad for a number two driver”.

Worse, he might have been thinking about Red Bull advisor Helmut Marko’s recent interview comment that while Webber could win races, he struggled to handle the pressures of a championship challenge.

Marko said at Sepang, “Seb made his own decisions and will have protection as usual.”

Many observers see a spoilt golden-haired child indulged beyond his competence, versus Webber the mercenary, who turned down an offer from Ferrari to stay with Red Bull. Webber is swallowing pride for lucre; but he has a big ego too.

Webber can brood until Shanghai on April 14. It has been mooted that Vettel should “give” Webber a win in compensation. But Webber does not want Vettel to give him a win; he wants to win. Nico Rosberg has the same time to consider his new spot, outshone by Hamilton’s bling.

So Shanghai will be as fascinating for its interpersonal relationships as for the reliability that McLaren and Force India can bring after the break, and a return to sanity for Ferrari and Lotus. Red Bull did not look exceptional at Sepang – even Mercedes challenged them, so Shanghai is boiling up to be a great event.

Phuket Songkran may be drier than usual