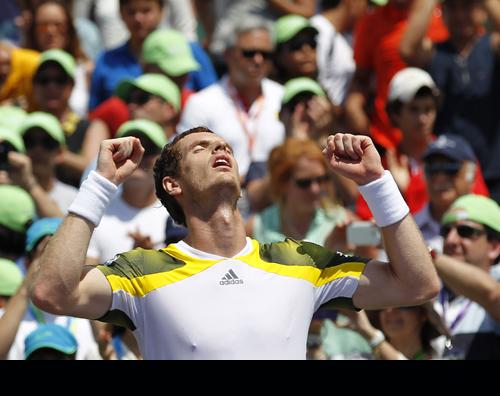 Murray was far from at his best against a dogged Ferrer but won the tie-break comfortably 7-1 after surviving a scare when the Spaniard had match point at 6-5 up, with Murray serving, in the third.

Murray’s forehand landed close to the line and he faced a challenge from Ferrer but the ball was shown in and the Scot won the next two points to force the tie-break.

The match was littered with errors, particularly in the third set when neither player could hold serve in the first six games.

But it was an enthralling duel in the mid-day heat at Key Biscayne with neither player flinching as they scrapped to the end.

“It was such a tough match, it could have gone either way, both of us were struggling physically at the end,” said Murray whose victory was his second at Miami following his triumph in 2009.

“It’s so tough against him. He has a great attitude, he’s a great fighter.I am sure we will have more tough matches in the future,” added the Scot.

The victory was Murray’s ninth in a Masters 1000 series event.

PHUKET: World number one Serena Williams fought back from a set down to beat Maria Sharapova 4-6 6-3 6-0 and win the Sony Open for a record sixth time on Saturday.

Second-ranked Sharapova has now lost to Williams in their last 11 meetings and has not beaten the American since her two victories in 2004.

The match was Sharapova’s fifth Miami final and her fifth defeat.

The Russian, who won at Indian Wells earlier this month, took her great form into the opening set, almost breaking Williams in a marathon third game featuring some outstanding baseline rallies.

Sharapova, playing sparkling all-round tennis, got her reward when she broke to go 3-2, with a powerful backhand shot that Williams could only return to the net.

Williams broke back straight away though, but a confident Sharapova took advantage of some over-hitting from the American to break in the ninth game and served out to win the set.

It looked as though Sharapova had a real chance to finally end her nine-year winless streak against the American but, as so often, Williams refound her game in the second.

After some entertaining exchanges, a double-fault from Sharapova handed Williams a break point and the Russian’s return to the net gave Williams a 5-3 lead and she held to force the third set.

The match turned decisively in Williams’ favor when Sharapova produced two double-faults to go down 3-0 in the third set and the Russian never was able to claw back from that position.