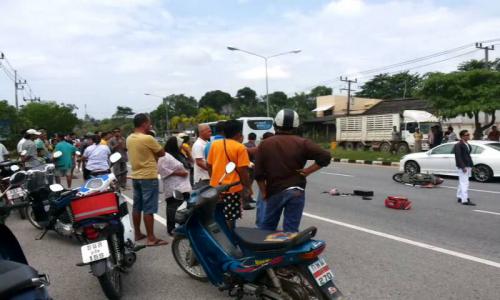 PHUKET: Police have yet to establish whether two men who died in separate road accidents in Phuket yesterday were from the same family.

Sutep Yotarak, 33, died after his motorbike collided with the motorbike driven by Araya Sanguannam, 62, in Mai Khao at about 11:30am.

After Mr Sutep fell off his bike, he was struck by a passing car and killed, said Capt Santi Prakonkarn of the Tah Chat Chai Police.

“We questioned her, but she was in shock and couldn’t tell us anything,” Capt Santi said.

“Witnesses told us that a car struck Mr Sutep and left the scene,” he said. “We are checking CCTV cameras in the area to get more information.”

Later, Wasin Yotarak, 18, died in Cherng Talay at about 10pm.

Mr Wasin was driving his motorbike in the right lane on Don Chom Tao Road when a pickup which had been parked in the left lane pulled out and attempted to execute a u-turn in front of him.

Rescue workers and Thalang Hospital staff did their best to save Mr Wasin, but he died about 30 minutes after the accident, said Lt Peerasit Noopayan of the Cherng Talay Police.

The driver of the pickup fled after the accident, but returned to the scene and surrendered after police arrived.

Police have declined to name the driver of the pickup.

“At this stage we have not yet confirmed whether Mr Wasin was related to Mr Sutep,” said Lt Peerasit Noopayan of the Cherng Talay Police.

“However, Mr Wasin’s family did not mention they had lost another loved one that day. We will confirm with the family when they come to the police station on Wednesday,” he added.

Phang Nga gets jump on Phuket with high season party

Nine Phuket heroes due to arrive next month