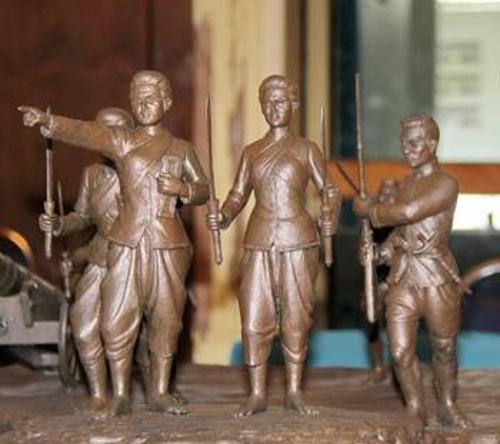 PHUKET: A 50-million-baht project to honor important figures in Phuket’s history moves closer to completion next month with the arrival of nine bronze statues.

Cast in Ang Thong province, the statues will be formally welcomed when they arrive at the Tah Chat Chai checkpoint on January 23.

“We will meet the statues at the checkpoint, then form a parade to escort them to Saphan Hin,” said Urai Lersukanusorn of the Phuket Provincial Culture Office.

After a celebration at Saphan Hin, the statues will be moved to their final destination at the Thalang Victory Memorial Field in Thalang (map here) on January 26, she said.

“We spent 26 million baht on the statues and the bases they stand on,” said Phuket Vice Governor Sommai Prijasilpa. “The Ministry of Tourism and Sports gave us another 24 million baht to build a car park and a fence and to decorate the area in a historic style.”

“This is an important project for the province,” V/Gov Sommai added. “The ceremony we are planning will let us all welcome the statues together and help people realize the sacrifices of the nine heroes.”

The schedule of the welcoming ceremony has yet to be set, she said.