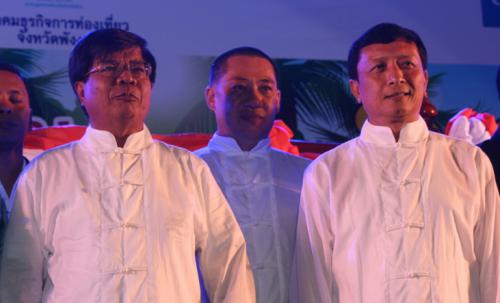 PHUKET: Phang Nga kicked off its tourism high season with a colorful parade down the main street of Khao Lak to the Tsunami Memorial last night.

The event comes a week ahead of the unofficial opening of the Phuket high season with the Patong Carnival (story here).

“Everyone needs to come together, including the private sector, to support the tourism industry,” Governor Thamrong said. “We need to ensure the safety of tourists, and preserve the beauty of our province.”

The Tourism Authority of Thailand (TAT) is continuing its campaign of promoting regions along the Andaman coast outside of Phuket, leaving the island province time to help its infrastructure catch up with the mounting pressures of mass tourism (story here).

With that in mind, the TAT is focusing its marketing campaign on the leisure holiday and eco-tourism markets, and avoiding targeting the Russian, Korean and Chinese mass markets.

Phang Nga has a high density of Green Leaf hotels and the activities being promoted have low carbon footprints, and hence a low environmental impact, explained a TAT officer.

TAT statistics show that about 90 per cent of the 1.6 million visitors to Phang Nga last year came from the international tourism market, and generated revenue of 9 billion baht.

Though the TAT is attempting to attract more of the domestic market to the region, it is difficult as Phang Nga is not known for its shopping, entertainment or dining, the TAT official explained.

With about 9,000 rooms and 190 registered hotels, Khao Lak represents 60 per cent of all tourism in the province.

The festivities in Khao Lak, which include stage performances and outdoor dining at the festival grounds, will continue until Tuesday.