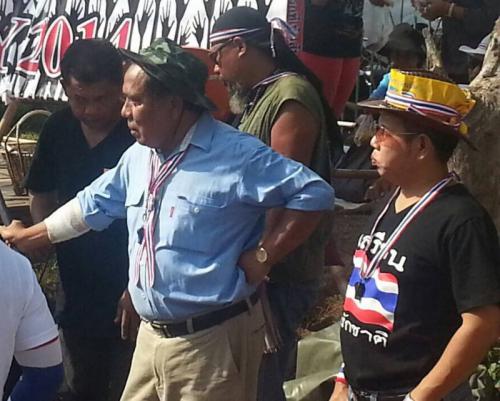 PHUKET: Organizers expect over 3,000 people to gather in central Phuket Town today in support of the anti-government “shutdown” now going on in Bangkok.

One group is already assembled on the grounds of Provincial Hall (map here), and another group is marching through town to Saphan Hin.

“Suratin Liang-udom, the former mayor of Rassada, will lead the group at Provincial Hall, and I will lead the march, starting at 10:30am,” protest co-ordinator Amnuay Kumban told the Phuket Gazette earlier this morning.

“We want to show our numbers and let everyone know that we want Prime Minister Yingluck Shinawatra to resign. We want political reforms before we have an election. We aim to get rid of the Thaksin regime,” he said.

Mr Amnuay noted that about 1,000 Phuket protesters had flown to Bangkok on five flights chartered by the People’s Democratic Reform committee (PDRC).

“They went to Bangkok on chartered flights on Saturday. We were worried we would be blocked if we went by road. Going by plane is smarter,” Mr Amnuay said.

“There will likely be traffic jams in Phuket Town today, and some people will be inconvenienced by the protest,” Mr Amnuay said.

“We apologize for that, and ask everyone for their understanding. We have no choice. The Thaksin regime needs to come to an end. We cannot live in a country controlled by him anymore,” he concluded.

And the winners of the Boat Show lucky draw are…