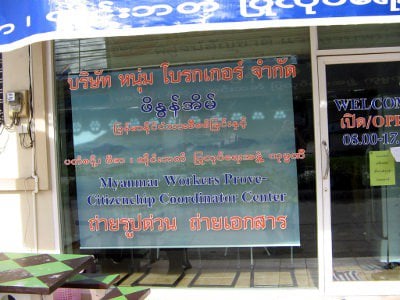 PHUKET: The number of illegal alien workers in Phuket is around 200,000, it was announced at a Senate committee meeting in Phuket on Friday.

About 150 government officers, senators and private-sector representatives met at the Kata Beach Resort on Friday morning to brainstorm better ways to legalize the estimated 1.5 million illegal workers from neighboring countries, especially Burma.
Suvit Meksereekul, who chairs the Senate committee on labor and social welfare issues, said the government needs to develop clear-cut policies that would give alien workers and the people who hire them better long-term employment prospects.

The meeting tacitly accepted that the “nationality verification process” begun last year has been a failure and that human trafficking in Burmese workers continues.

“On the issue of human trafficking, I have heard that some operators buy new pickups on credit to transport the workers in from the border at Ranong. They just abandon the vehicles if they get caught,” he said.

Such practices speak to the scale of the business and the profits involved, he said.

Legal registration of all alien workers was the only real solution to the problem. Achieving this would require more cooperation from employers, he said.

“Right now businesses just see that they lack employees [and continue to hire illegal aliens]. If this continues the number of alien workers entering Thailand will be virtually unlimited. We need to get control of the situation by matching the numbers allowed to enter with the number of workers actually needed,” he said.

Lampang Senator Peera Manatas, who chairs a sub-committee on administrative issues related to registration of workers from Burma, Cambodia and Laos, reiterated that there is no way of knowing with accuracy how many workers from those countries are working in Thailand illegally.

Comprehensive registration would solve this problem, afford basic human rights and medical care for the workers, and put an end to complaints from abroad over such issues, he said.

Checks on workers at important border crossing towns in Chiang Rai, Tak and Ranong revealed that only about 50% of the migrants were registered, he said.

“We need help from the private sector, but employers seem worried that the workers will not stay with them long enough to justify the expense [of registration]. So we are looking for ways for the government to reduce such expenses,” Senator Peera said.

Further complicating the issue were views held by the workers, many of whom fear that registration would cause their families back home to be taxed.

“Also, our process is complicated and expensive for them, especially given the low earnings they make,” he said.

He was referring to the 2,000 baht fee for issuance of a “work permit” for those who undergo the verification process. For the Burmese workers who make up the majority, verification also requires an expensive trip to a “nationality verification center” at a Burmese border checkpoint across from Ranong, Chiang Rai or Tak province.

“As we are trying to solve the problem, today we come to listen to employers, business representatives and representatives from related government agencies including the Labor Department, Interior Ministry, police and the military,” he said.

As for the scheduled deadline for registration on February 28, 2012, the date would probably have to be extended because of the lack of compliance from workers, especially those from Burma, he said.

Although not specifically addressed, a key part of the problem is that many of the “Burmese” workers are not Burmese at all, but rather come from lands controlled by the Burmese junta.

Many, including many tens of thousands of ethnic Mons in Phuket, are effectively stateless – as are their children, many of whom have never known any home apart from Thailand.

“We have not given them nationality because their parents came here illegally. More important is the fact that the government of Myanmar doesn’t accept them either, saying they were born in Thailand and thus should be granted Thai nationality,” he said.

At present rates, the numbers of such stateless children living in Thailand could swell to 100,000 in the future, he said.

“What will happen if we have 100,000 [Thai-born] stateless people living here? It will be the same problem that the Rohingyas [stateless people from Western Burma] are now facing,” he said.

Nakorn Silpa-Archa, director-general of the Labor Ministry’s Department of Skill Development, said another reason there are more than million alien workers in Thailand is the fact that Thai employers are quick to hire them over suitably-qualified Thais.

Thai people should be offered jobs first, with jobs going to aliens only if they are really needed, he said.

Labor and social welfare committee spokesperson Suampha Kochakrai said another reason Thailand attracts so many migrant workers is that Thais are leaving their homeland to work abroad.