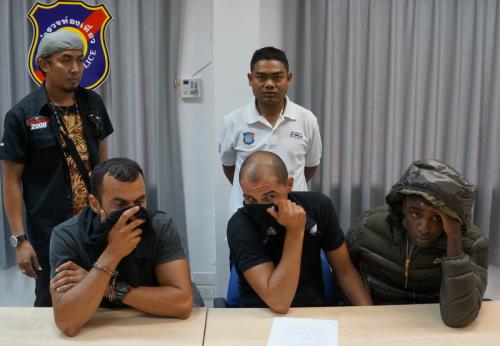 The foreigners – named by police as French nationals Mahamond Mhoussin, 22, and Zaidi Ganzouai, 29, and Tunisian national Ramzi Adjemi, 31 – were presented to the press at the Phuket Tourist Police headquarters in Phuket Town this morning.

“Tourist Police yesterday received a tip-off of an ATM scam gang operating in Phuket. We were able to apprehend the suspects and found them in possession of 27 items related to ATM card fraud,” Col Yotsavee said.

Among the items seized in making the arrests were a laptop computer with an ATM data card reader, 70 fake electronic cards coded with account information for withdrawing money, 7.5 grams of cannabis and about 6,000 euros in cash and about 134,000 in baht.

“All three suspects were arrested at a house in Kathu at about 3pm,” Col Yotsavee said.

Mr Adjemi was charged with all of the above, and with possession of an illegal drug.

“The gang withdrew cash from ATMs in many areas across Phuket so they could go shopping and they changed the money they stole into euros,” Col Yotsavee explained.

The three men were to be detained at Thung Thong Police Station for further questioning, he added.