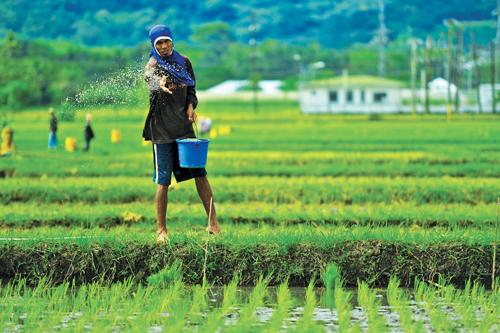 PHUKET: As we all know to our cost, snails are the gardener’s bane. Today’s subject, however, is not about the common or garden variety creature that hides in the day and slides and slithers around at night to devour your seedlings, but another, more exotic species. Perhaps it merits a less disparaging mention in dispatches.

The species in question is the golden apple snail (Pomacea canaliculata), one of the largest freshwater molluscs in the world. Maybe beautiful is the wrong epithet to use for a snail, but in truth, it is rather special. Usually bright golden-yellow, but also almost any other color including pink or purple and with or without dark bands. Up to 15 centimeters across, the snail inhabits watery abodes, and if you are a Thai rice farmer, you may have mixed feelings about this gargantuan creature, because it has shown itself capable of climbing out of its natural element and gorging on tender rice shoots. On the other hand, if you are a gourmet, you may well enjoy a repast of these very unusual “escargots“.

So too the Asian openbill stork. This large bird, in common with two North American birds, the snail kite and a rail-like wader called the limpkin, feeds almost exclusively on the golden apple snail. This mollusc’s relatively recent arrival in Thailand is linked to its introduction to Taiwan in the 1980s, where it was apparently intended both as a protein-rich addition to the diet of poor farmers, and a new gustatory delight. In the way of these things, this intrepid snail, which has both gills like a fish, lungs for normal aspiration, and an operculum – a film which closes the shell’s opening and enables it to survive in drought conditions – migrated to the rest of South East Asia and homed in on the lush paddy fields of central Thailand.

The Asian openbill stork, which appears to have a sixth sense in regard to the existence of this special food source, has detected this expansionist pattern and has followed the rovings of these succulent morsels. Indeed, a recent sighting of a huge mustering of these birds in South Phuket, estimated to number between five and six hundred, offers at least circumstantial evidence of the golden apple snail’s residency here. I myself saw a huge drift of storks soaring and circling on thermals some days ago, without my being aware of precisely what kind of bird they were. A friend who had seen hundreds of large grayish-white birds with glossy black wings patrolling a patch of lake and swamp inland from Rawai Beach, also asked me about them. A large flock had also been sighted by bird-watchers, on December 17, foraging on low-lying, boggy land near Ya Nui beach.

Initially unsure of their identity, I decided to consult an ornithologist who is a keen and expert observer of Thailand’s birdlife. Derek Evans promptly wrote back, saying that he had seen the storks in various locations, and quoted another authority, Dr PD Round, who offered confirmation of Derek’s view that the bird in question was indeed the Asian openbill stork (Anastomus oscitans). He noted that they are now “spreading throughout Thailand from [their] former heartland in the lower central plains around Bangkok, encouraged by the spread of irrigation for rice multi-cropping”, and added significantly, “in tandem with the spread of the golden apple snail”.

Paradoxically, there are hardly any paddy fields in Phuket, so the snail threat to rice farmers is minimal. But the few remaining areas of marsh are disappearing fast, including the wetland near Ya Nui beach. At this very moment, this precious habitat is being destroyed, as “developers” tip rubbish on the lush, bog-land vegetation in an attempt to prepare the site for – yes you’ve guessed it – yet another concrete jungle.

One can only conjecture how the snails have arrived here – if indeed they have. Perhaps the snail’s eggs, which are laid in sticky clumps out of the water to avoid predators such as newts and frogs, may have been transported on the legs and feet of fellow waders such as herons or egrets, even conceivably in their innards.

More extravagantly, they may have arrived here as a consequence of the pet fish trade, for these monster snails are sometimes found, along with ornamental fish, in aquarium tanks, where they are useful disposers of algae. Thence to fish ponds and beyond is no great leap. Anecdotally, my partner swears her brother used to catch these creatures as a boy in Trang (on the mainland south of Phuket) where they were much prized as a delicacy, and according to local lore, had hallucinogenic properties. She added that they had vanished years ago. Unsurprising….

Coincidentally and in the view of specialist Dr David R.Wells, the presence of these storks may be part of a wider pattern, “a more general expansionist trend among South East Asian large, inland water birds over recent years… Black-winged Stilts, breeding populations of Little and Cattle Egrets… the consequence of as yet unidentified cultural and socio/economic changes… that deserve urgent investigation.”

Maybe the golden apple snail deserves to be part of this important and ongoing saga. My pious hope is that the snail is already here – and here to stay.

This article appears in the current (May 4-10, 2013) issue of the hard-copy Phuket Gazette newspaper, now on sale at newsstands throughout the island. Digital subscribers may download the full newspaper, this week and every week, by clicking here.

Phuket International Boat Show will be in January