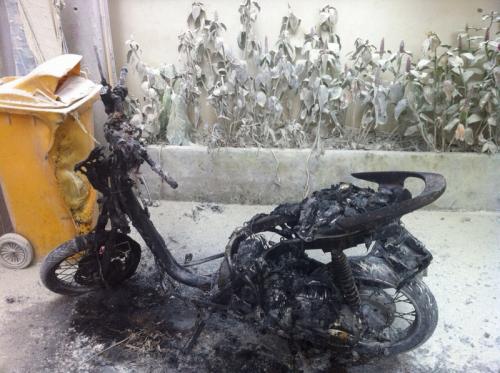 PHUKET: Police suspect arson in the latest Phuket motorbike blaze in which one motorbike was destroyed and two others damaged in Patong early this morning.

Officers were called to a five-storey apartment block in Soi Nanai 8, about 500 meters south of the Jungceylon shopping mall (map here), at 7:10 am.

“We arrived to find three motorbikes on fire. Some tourists and local residents were moving other motorbikes away from the fire while others were putting out the blaze with fire extinguishers,” Maj Pattapee Srichay told the Phuket Gazette.

Thipporn Keawprom, 28, said she heard people shouting and came down from her apartment in the building to find her two motorbikes ablaze.

“I have no idea who did this to me. I have never had a conflict with anyone,” she said.

“We smelled fuel at the scene, and suspect that the arsonist poured fuel on the motorbikes,” Maj Pattapee said.

“We have called the Phuket Office of Forensic Science for their officers to inspect the scene and determine the cause of the fire,” he added.

Maj Pattapee noted that 40 motorbikes have been destroyed by fire in Phuket in recent months.

“We are continuing our investigation and will arrest anyone involved in these arson attacks,” he said.