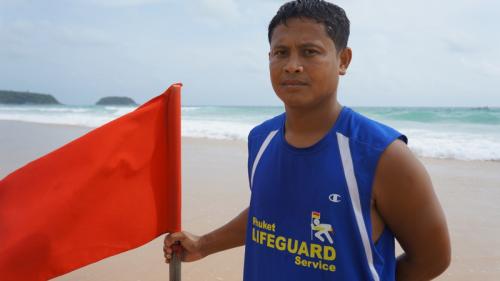 PHUKET: A Japanese surfer rescued this afternoon from the strong surf at Kata Noi Beach, on Phuket’s west coast, is conscious and recovering, the Phuket Gazette was told.

Lifeguards saw the man, believed to be in his early 50s, out surfing the large waves at the popular tourist beach.

“We are are not sure what happened, but the next time the lifeguards saw him – at about 4pm – he was unconscious in the water,” explained Uten Singsom, head of the Kata-Karon Lifeguard Club.

Lifeguards rushed into the surf and pulled the surfer back to shore.

At about 5:30pm, Mr Uten called the hospital to confirm the condition of the man, who has yet to be named.

“Hospital staff told me that he is on assisted breathing equipment, but otherwise he is safe and should make a full recovery,” he said.

Staff at the hospital declined to confirm any details of the incident to the Gazette.

UPDATE: Mr Uten later confirmed that the surfer was struck in the head by his own board. Lifeguards pulled the man to shore with the board still attached to his ankle.