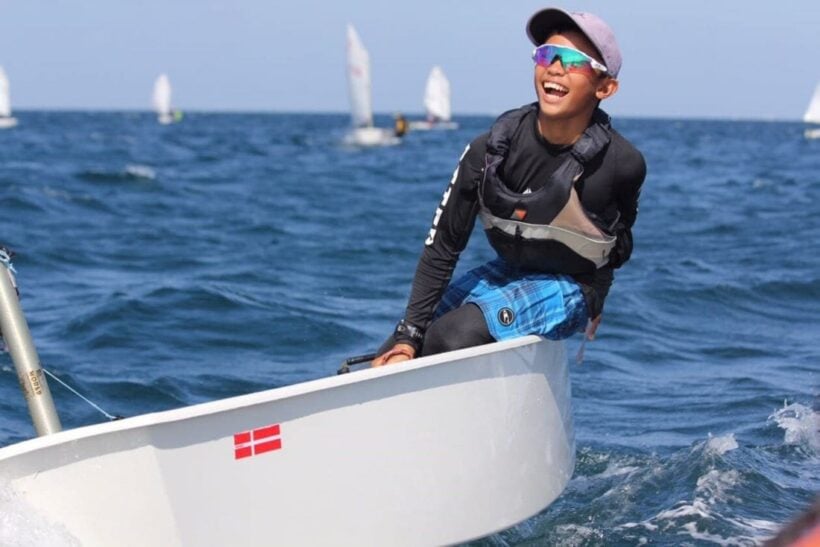 With good winds of about 15 knots returning for the final day of the 32nd Phuket King’s Cup Regatta yesterday, some exciting racing was held off the south-western tip of the resort island as one of Asia’s biggest sailing events came to a close.

With almost 90 keelboats and multihulls as well as 107 dinghy sailors, the waters of the Andaman Sea have been awash in sails this week.

Despite winning one race each on Saturday, Australian Ray Roberts and his TP 52-design boat Team Hollywood took the overall honors in the IRC Zero Class after a close tussle all week with defending champions Kevin and Tom Whitcraft on their Thai-registered boat THA72. Both boats were of the same stripped down design and built for racing, but Roberts’ boat was a little newer and a little lighter and won more races through the week. It was Roberts’ sixth win in the top flight class at the King’s Cup in 23 years of contesting Thailand’s premier sailing event.

Sarab Singh finished third overall in the IRC Zero Class on his boat Wind Sikher, the oldest of the three TP52s racing.

One of the most photographed boats in this year’s fleet was the imposing 60-foot trimaran SHK Scallywag Fuku Bid from Hong Kong, but despite its speed on the water it had to settle for second place behind the smaller but also very fast Australian trimaran Fugazi with Dan Fidock at the helm in the Racing Multihull Class. Australian Dave Fuller bought up third place on his boat Java.

One of the features of this year’s Phuket King’s Cup Regatta, and the place where the future stars of the sport are nurtured for the years ahead, was the International Dinghy Classes, which featured 107 young sailors from around the country.

“These young sailors will one day be aboard the big keelboats and multihulls and racing in the Phuket King’s Cup Regatta,” said Commander Peera Sagultem of the Royal Thai Navy, who was also the Dinghy Race Officer.

With 12 wins from 12 races, 13-year-okd Thai champion Panwa Boonak kept a clean sheet to take the honors in the Optimist Class. Panwa, who won the 2018 Optimist Asian & Oceanian Championship at the Ngwe Saung Yacht Club & Resort in Myanmar, has proved to be an outstanding sailor in the many events he has contested and will be a great ambassador for Thailand when he represents the kingdom in coming international events.

Another consistently good young Thai sailor with a promising future in the sport is M.L. Weka Bhanubandh, who finished second in the Optimist Class. Patihan Vorrasart came a very credible third in what proved to be a tough field.

Chusitt Punjamala won every race except three in the 12 contested in the Laser Standard Class to finish as the overall winner. He was followed by Arthit Romanyk and Chairat Dangdeemark in second and third places respectively.

At the end of an exciting week’s racing, Kevin Whitcraft, President of the Phuket King’s Cup Regatta Organising Committee, said: “From the keelboat fleet to the large dingy fleet in the King’s Cup striving for glory on the north end of Kata Beach, it has been a great tribute to our King, our host country and all who revel in the freedom of the seas – particularly in Thai waters.

Not everybody can win and I congratulate those who did and I would like to tell one and all, win or lose, to come and join us again for the 33rd regatta which will be held from December 1-7, 2019. The skies will be blue and the winds will be fair.”

All the winners in the various classes were presented with their prizes at a special ceremony on Saturday evening by His Majesty the King’s Personal Representative ACM Chalit Phookphasook.